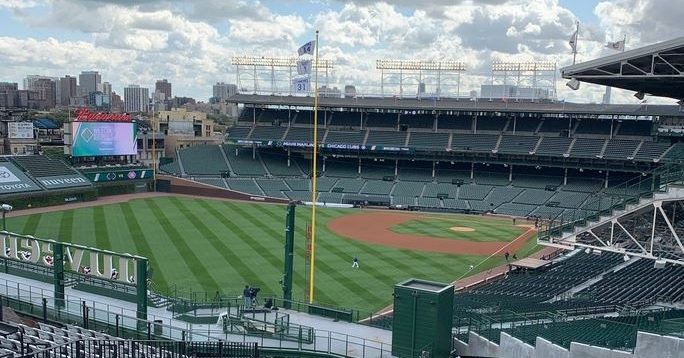 The Cubs need to win today to force a game three

After spending the entire season without an opportunity to a Cubs game, I was fortunate enough to receive a ticket to Wednesday's postseason game between the Cubs and the Marlins at Wrigley on a rooftop, thanks to CubsHQ as well as Kris Bryant and RedBull.

I had never been to a rooftop before, nor have I been to a playoff game before Wednesday. As soon as I got to the rooftop, I walked straight up the stairs to the sixth and highest floor, walked out on the sky deck, and took in the beautiful view of Wrigley Field, that looks so perfect from even that high and that far away.

I got settled, Andrew Belleson’s PA announcement of the lineups went ringing through the streets of Wrigleyville, and if you were not fired up already, John Vincent’s rendition of the National Anthem definitely got you there.

#Cubs lineup, these guys are locked in: pic.twitter.com/0eZ46T6rTn

Kyle Hendricks was on the mound for the Cubs, and while Wrigley Field is usually a chaotic pit of noise in the playoffs, the calm and quiet vibe fit right into Hendricks’ method of pitching. Hendricks wasn’t as sharp as usual, walking three batters and allowing the leadoff hitter to reach in four straight innings, but the overall start was solid from Kyle.

Hendricks was able to wiggle out of jams in the 4th, 5th, and 6th inning, seeming as if the momentum was on the Cubs’ side.

Between rain showers and windy conditions, I had a Buona Beef sandwich and a cookie as Hendricks and Sandy Alcantara were locked in a pitcher’s duel. But in the fifth inning, as the story has been for most of the year, Ian Happ launched an opposite-field homer to spark the Cubs’ offense and give the Cubs a 1-0 lead.

While I thought the weather, wind, and lack of fired-up fans would play into Hendricks’ general advantage because it fits the vibe of him as a pitcher, I was mistaken. In the 7th inning, Hendricks allowed two men to reach, and Ross elected to have Kyle stay in the game to face notorious Cubs killer, and lefty better, Corey Dickerson. Dickerson launched a three-run homer on Hendricks’ 106th pitch toward left, and I knew once I saw the ball disappear…it was bad news.

That ended Hendricks’ day, and Jeremy Jeffress came into the game and allowed two more runs to come in on a homer from Jesus Aguilar — and that two-run shot sucked the life out of an already quiet stadium.

Ross will be questioned for not bringing in a lefty to face Dickerson, especially since an inning later, he brought in a lefty for the same task.

Regarding the weather and lack of fans, the underwhelming playoff vibe actually was more resemblant of the Cubs’ offense than Hendricks. Aside from Ian Happ’s home run, the offense mustered up just a few hits and left nearly ten men on base throughout the game. You can not exactly call it surprising as the Cubs offense has gotten into these spurts of producing nothing and going quiet for periods at a time.

Now the Cubs have their backs against the wall, with Cy-Young contender Yu Darvish on the bump for Chicago against Sixto Sanchez of Miami. It’s a matchup the Cubs want, as they try to keep their season alive and force a game three on Friday.

As for me, it was a great experience. Whether it was eating good food, watching the Cubbies, listening to the host of the Son Ranto show hammer the cowbell, or chatting with Barstool Carl, my first trip to the rooftop and first Cubs playoff game was something I will never forget. Thanks to Redbull, Kris Bryant, and CubsHQ for making it happen.

Now it’s up to the Cubbies to make sure we remember this 2020 season for a good reason.

Somehow someway I made it to a #Cubs game this season! Thanks to @KrisBryant_23, @redbull and @ChicagoCubsHQ for making this happen. #FlyTheW pic.twitter.com/l9ec7ZYkl8