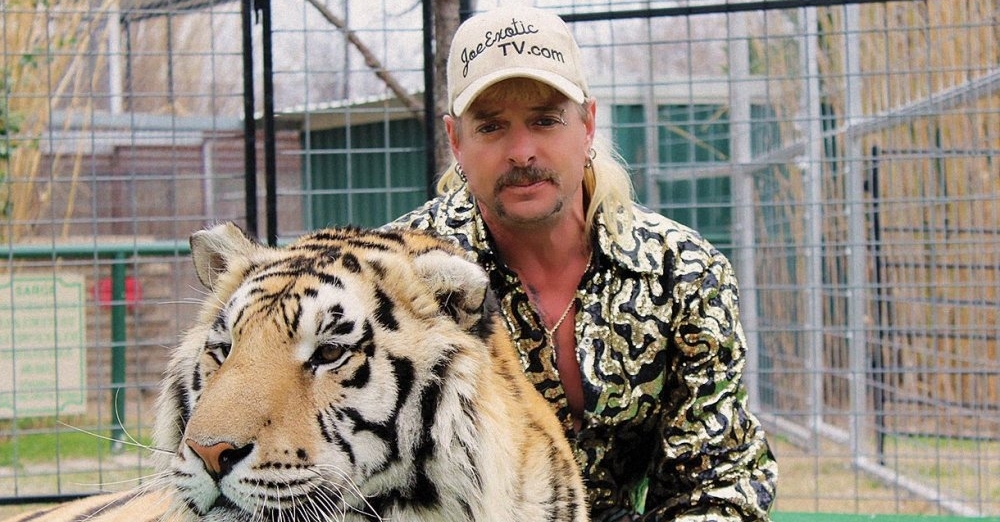 Tiger King is a very bizarre but interesting show on Netflix

Although I entitled this “Things to do while there’s no Cubs baseball,” I could have just as easily called it, “How Ken has spent his extended spring vacation.”

First and foremost, spend some time with your kids and educate them about something. Don’t worry if you don’t have a teaching degree, as you couldn’t do any worse than most public schools. Their five-day spring break has now turned into a six-month-long summer vacation, so you may as well make the most of it.

If you’re feeling desperate without baseball, there’s plenty of classic baseball games on FS1, MLB Network, ESPN, and others. If you have any really unintelligent friends, you can always make money betting on the replays. Try it. It’s fun. Spot them like six runs, then just about the time they’re ready to demand payment, get yourself a refreshment and tell them to wait until after the bottom of the ninth. When your friend realizes that he was had, he probably won’t be your friend anymore, but hey, you’re supposed to be practicing social distancing anyway.

Next, take your winnings from the ballgame and go buy some gas, as your lawn probably needs to be cut by now. While you’re at it, fill up the car(s), as gas prices haven’t been this low in decades. I’m not sure what gas costs near your home, but I paid $1.54 a gallon the other day. Kind of made me want to go cruising around for a while, but the wife demanded that I get the lawn cut.

If you’re the green thumb type, it’s just about time to get the rototiller out (or rented) and start plowing up land for the garden. Tomato seeds and some of the other vegetables should have already been started indoors, and it won’t be too much longer (in most places) before you can start planting outside. We had a huge garden last year, but once the deer helped themselves to almost 120 of our corn stalks over three days, I lost interest.

If you’re able to escape the house – no, I’m not talking about COVID-19 lockdowns; I’m talking about getting away from your wife and her honey-do list – get out and do some fishing. It’s still a little early in the season for some species, but this is the perfect time to go after some of the others. Again, I’m not sure where you may live, but here in Missouri, they’ve waived the fishing license requirement through April 15th, and there are plans on extending the waiver, so people have something to do.

If you’re the homebody type (and aren’t we all, these days?), then there’s a plethora of good stuff to watch on TV. Until this outbreak started, my TV watching life consisted of MLB, Jeopardy, ABC World News, and a couple of other shows (more on them later), but now I have something to watch just about every night.

Better Call Saul tops the list of my to-do TV shows list this spring. Saul Good (aka Jimmy McGill) is played by Bob Odenkirk, a native Chicagoan, and lifelong Cubs fan. He’s the lawyer you’d want when you get in trouble – just so long as ethics don’t count. The new season (5th) is just about over, but the first few seasons can be found on Netflix.

If you’re going to start watching that though, you might want to see Breaking Bad first, as Better Call Saul is a prequel. Neither my wife nor I had any desire to watch a show about dealing and manufacturing meth, but trust me, you’ll be riveted.

Also, on Netflix, all three seasons of Ozark are now out (the third season was released last week). If you’ve previously had no interest, Marty Byrde (Justin Bateman) is a financial planner who gets himself involved in laundering money for a Mexican drug cartel. Marty’s good at what he does, but just the minute he gets himself out of trouble and danger, another new obstacle surfaces. This series is full of strong language, nudity, and adult subject matter, but it is phenomenally written and very suspenseful.

Available on Hulu and the Fox Now streaming channel is a new show called “Deputy.” Season One just ended (it aired on Fox), but you can catch it all by streaming. Deputy Bill Hollister (Stephen Dorff) becomes the Sheriff of Los Angeles County under a weird set of circumstances. Fighting the politics and corruption that comes with the job, Hollister is determined to do things his way – no matter who it annoys.

The next one that my wife and I stumbled upon was another new show called For Life (ABC and YouTube TV). Inspired by the real-life story of Isaac Wright Jr., Aaron Wallace was wrongfully convicted of drug trafficking. Instead of taking a plea deal, Wallace goes to trial and buys himself a life sentence. Finding a loophole in the system, he obtains his law license, representing inmates as he builds his case for proving his wrongful conviction.

Wallace faces two problems – first, no judge wants to deal with an incarcerated felon turned lawyer. Next, the dirty district attorney’s office that put him away isn’t about to make Wallace’s life easy. Good stuff, and you can find every episode online.

Also good, if you want to catch up on multiple seasons, are Station-19 and The Rookie.

Do you like people watching? It’s not safe to do that in public these days, but if you want to see some real train wrecks, check out the Netflix Original Series, “Tiger King: Murder, Mayhem, and Madness.” Warning: Strong language in this one.

Wikipedia defines the show as “An exploration of big cat breeding and its bizarre underworld, populated by eccentric characters.” This is a documentary about a guy named Joe Exotic (aka Joe Maldonado, Joe Maldonado-Passage, Joe Schreibvogel) who raises big cats. The show features several of the countries largest big-cat breeders, zoo owners, and sanctuary owners, and let me tell you. They make the carnival crowd look relatively normal.

Exotic was successfully sued to the tune of a million dollars by a woman who runs a big cat rescue in Tampa (Carole Baskin), but ends up in even more trouble when he won’t let a sleeping dog (er, uh, cat) lie. After making several internet threats about wanting Baskin dead, Exotic finally gets 79 years in prison for multiple citations involving the animals, along with two counts of solicitation of murder.

If all of this isn’t enough, this goof ran for President of the United States in 2016, then ran for Governor of Oklahoma in 2018 (where he got 18% of the vote). Watch this one, and you’ll surely appreciate your real friends a hell of a lot more when it’s over.

Well, this has certainly made me feel more like Roger Ebert than Ken Rosenthal, but there isn’t much else to do these days. Keep practicing your social distancing (God, I’ve already learned to hate that term), so we can get through this awful pandemic and get back to life.

By the time you get through this list, you should have had to cut the lawn at least two more times, so at least there’s that! Stay safe.