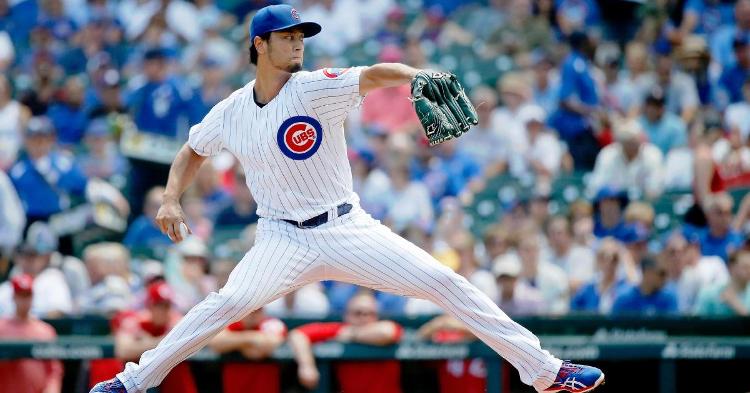 After a disappointing season in 2018, how many of you were wondering if Yu Darvish’s troubles during the 2017 World Series was going to follow him to Chicago? Well, I think we got a great view toward the end of last year how dominating a pitcher Darvish can be if his pitches aren’t being signaled to the batter.

It would be perfectly understandable if Yu started doubting himself, wondering how the Astros hit him so hard during the 2017 Series when his ERA ballooned to an astounding 21.60. He has fought back from injury and reaffirming his mechanics to stage double-digit strikeouts in his final three games of the 2019 season. Hope springs eternal for Cubs fans heading into the 2020 season to see if Darvish can become the ace of the Cubs rotation.

For the Cubs to compete in 2020, they need Darvish to begin to take over the reins from Jon Lester as the stopper of the starters. Allow yourself to imagine a pitching rotation with Lester, Darvish, and Hendricks at the top pitching at their best. Lester might not be at his best, but he will be steady for sure. The Professor will be his wryly self. The question mark remains with Darvish to see if he will dominate in 2020.

He finished the 2019 season with a K/BB ratio almost a full point ahead of his career numbers. He has rediscovered his breaking pitches, which is vital since he throws a cutter nearly 37% of the time. It is also the pitch he throws for strikes most of the time. His four-seamer averaged 94.1 mph in 2018 and 2019 topping out at 98, important since he relies on this pitch 27% of the time. It is fascinating that he has an arsenal of 8 different pitches, one of very few pitchers in the Majors who throw that many different pitches. Who does that and throws them for strikes?

A confident Darvish will be crucial in establishing the Cubs again as a top staff in 2020. The staff ended the season with the 7th best ERA in the majors and 3rd best in the National League. He will have another year under the tutelage of pitching coach Tommy Hottovy and together should be able to take the next step in sharing the ace responsibilities with Lester. It is vitally important he stays healthy and can eat up innings, especially since the fifth spot in the rotation is up for grabs.

We all want Yu to be successful, especially now since the World Series cheating debacle robbed him of some confidence and a chance at a title. And if the Cubs can give him some run support, he should be able to provide the Cubs a formidable trio to compete against anyone in the National League. The Cubs will need it against teams in their division, with the Cards and Reds having great pitching staffs as well. It didn’t seem to matter in 2016 as the Cubs staff dominated, and this staff is as good if not better than that one. At least on paper, they should be.

Yu’s confidence this spring will be a telltale sign that he is ready to take the next step to be the ace of the Cubs, a place he did not attain with Clayton Kershaw atop the Dodgers staff. The Cubbies are the beneficiaries here if Yu steps up because they have not had a clear cut ace since the 2016 season. They may have two in 2020. Yu has something to prove, and hopefully, he will prove it out on the mound.

Now that the onus of not being able to get a W at Wrigley is off his back, maybe this year, he can dominate on his home field, and the Cubs can ride his success to another pennant. Nobody will be tipping his pitches, and with the plethora of offerings he can bring from the mound, he should be able to take that next step in keeping hitters off balance and once again becoming one of the top pitchers in the league.

If Darvish can become what the Cubs top brass and we imagined he can, it will give skipper Dave Ross the flexibility to match up with teams using a Darvish, Lester, Hendricks, Quintana combo at the top regardless of who takes the ball as the 5th pitcher in the rotation. Ross could also go with Lester as number one and then have Darvish and Hendricks back to back in the middle of the rotation. The unknown is how Darvish will pitch this spring. Rossy will be observing the progress closely, and as a catcher, it will be interesting to see how he chooses to match up his top two or three pitchers against the opposition.