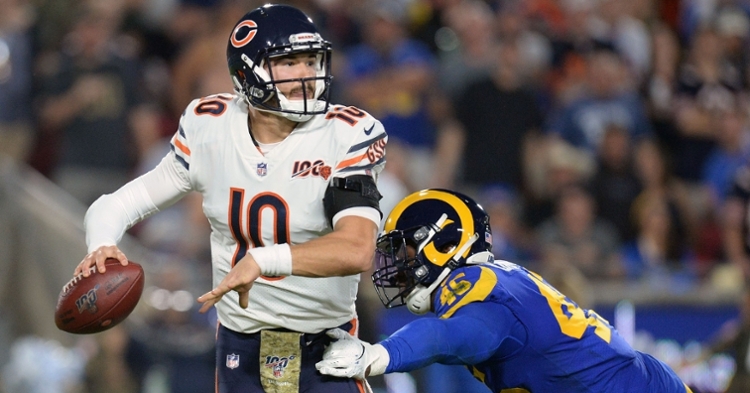 We are down to the final three weeks of the season, and the playoff picture is an eight-team race for the top six seeds in the NFC. What we know as of now is that San Francisco, New Orleans, Green Bay, and Seattle have all clinched a postseason berth thus far. That leaves four teams battling it out for two spots with the reality of three teams fighting for one spot.

We know Dallas or Philadelphia will get in as someone has to win that dreadful NFC East this season. That leaves one spot up for grabs as the Bears, Vikings, and Rams will duke it out for the sixth and final NFC spot over the next three weeks. As it stands right now, the Vikings not only hold that number six seed but control their destiny in the process. If they win out, they make the postseason.

The Rams are right behind the Vikings at 8-5, and with one slip up from Minnesota, Los Angeles would move into the sixth seed, but with a matchup against San Francisco looming in week 16 that could make or break their season. Then you have the Bears who are currently in the eighth position and looking up at 7-6. Can they still make the postseason, Yes, but they need a lot of help in the process?

To make things easy, Chicago controls their destiny in a way as they can win out and hope for some help. Should the Bears win out, they would finish the season 10-6 and be in a position to land in the six seed. That would mean they would have beaten the Vikings twice and should Minnesota win just one of their final three games, and the Bears would move ahead of them due to tie-breaker scenarios.

Then you have the Rams who may only be one game up when looking at records, but technically two games up because the Rams did beat the Bears this season. This is the one team the Bears need to pay attention to closely as they need the Rams to lose two games for them to pass them up. The San Francisco game in week 16 could be the opening Chicago needs, but that would mean the reeling Cowboys would need to pull off the upset in Dallas this weekend for the Bears to have a chance.

Mathematically speaking, Chicago is very much alive for the postseason and will remain alive through week 16 if Chicago can manage to win this weekend, or if Minnesota loses. Should both the Bears and Vikings lose, the Bears would remain alive for one more week as would they if both teams win. Whatever Minnesota does this weekend, Chicago must match or one-up them to keep their hopes alive.

Yes, there is a slim chance the Bears get into postseason play, but there is a chance, and that is all teams generally need. Looking at the Bears remaining schedule, and you can argue it is the most difficult among any team left in football.

Starting this week, Chicago will travel to Lambeau to take on a Packer team battling for a division title. With the division on the line between Minnesota and Green Bay in week 16, Chicago would undoubtedly love to play spoiler against their oldest rival, setting things up for an exciting battle down the stretch.

Week 16 sees the Bears hosting the Chiefs, and while Kansas City should win that game handily, will the Chiefs have anything to play for at that point. Currently, the Chiefs have already locked up the AFC West, and cannot earn anything higher than a two seed. Depending on what happens with New England in the coming weeks, Kansas City does hold the tiebreaker and could know exactly where they sit come week 16. Would that mean Andy Reid sits some of his players to get them healthy for the stretch run?

That leads us to week 17, where the Bears would have to travel to Minnesota for the final game of the season. Hypothetically speaking, let’s say Minnesota drops one or two games as do the Rams heading into week 17. That would mean the Bears/Vikings game could determine a postseason berth, which would add fuel to an already hot fire. Given the way both teams have played over the past two months, this game would come with plenty of emotions, and we could expect a playoff feel for that final week.

Regardless of what happens from here forward, the Bears have clawed their way back into postseason conversation and now find themselves battling for the final spot in the playoffs. Yes, help needs to happen, but all the Bears need to do is win out and keep the pressure on everyone else.