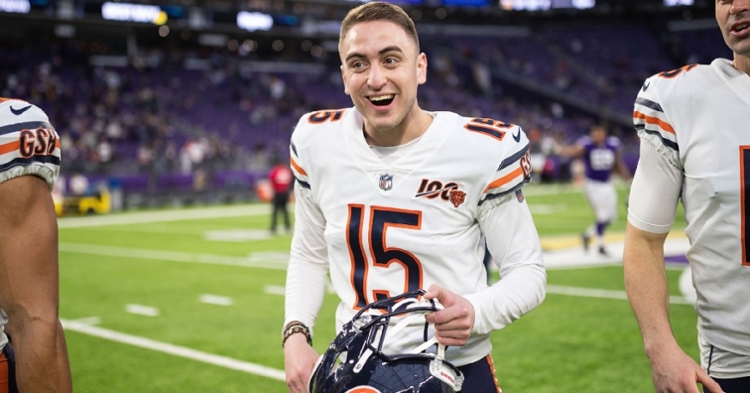 MINNEAPOLIS — Ironically, solid kicking highlighted the final game of the season for the Chicago Bears (8-8) on Sunday, marking a change in the usual theme of kicking woes coming at the end of the year for the Bears. Kicker Eddy Pineiro went 4-for-4 on field-goal attempts for Chicago, and the Bears picked up a Week 17 victory at U.S. Bank Stadium over the Minnesota Vikings (10-6). With the Vikings already locked in as the sixth seed in the NFC playoff bracket, very few notable Vikings took the field in the contest, which was essentially meaningless for Minnesota. However, the Vikings scored 13 points in the fourth quarter and nearly pulled out the win, but a 22-yarder by Pineiro in the game's closing seconds enabled the Bears to come away with a 21-19 triumph.

The Bears reached the conventional point total of 21 rather unconventionally, with a safety and the aforementioned four field goals combining with an offensive touchdown to make up Chicago's scoring plays. Bears quarterback Mitchell Trubisky was a fairly efficient 26-of-37 for 207 yards through the air, but he did not throw a touchdown pass on the afternoon. Instead, Bears running back David Montgomery capped off his rookie campaign in style by scoring the Bears' lone touchdown of the day as part of a 113-yard rushing performance. Countering Montgomery was Vikings running back Mike Boone, who amassed 148 yards on the ground and scored Minnesota's only touchdown. Bears wideout Allen Robinson II led all receivers in the matchup with nine receptions and 71 receiving yards.

Like Pineiro, Vikings kicker Dan Bailey went 4-for-4 on field-goal tries. Sean Mannion started under center for the Vikings, with Kirk Cousins' backup collecting a modest 126 yards on 12-of-21 passing. The Bears led 11-6 at halftime, thanks to a safety and Pineiro field goals of 26, 33 and 34 yards, respectively. The safety came on the first play following a Bears punt that pinned the Vikings at their own 1-yard line. Minnesota suffered three turnovers in the contest, including a fumble by Mannion on the second play from scrimmage. On the first play of the game, Boone broke free for a 59-yard carry, which was then nullified by Mannion coughing up the football. A 37-yarder and a 38-yarder by Bailey provided the Vikings with their six first-half points.

Montgomery powered his way into the end zone from 14 yards out at the 9:49 mark of the third quarter, putting Chicago ahead 18-6. The Vikings reeled off 13 unanswered points in the fourth quarter, as a 1-yard rushing score from Boone and kicks of 39 and 34 yards by Bailey resulted in Minnesota going up 19-18 with 4:53 left to play. A strip sack of Trubisky culminated in the go-ahead field goal. The Bears bounced back, though, and a 15-play, 4:43 drive set Pineiro up for the winning kick. Pineiro's 22-yarder came with 10 seconds remaining, and the Bears punctuated their 21-19 victory by intercepting Mannion on the final play of the game. Finishing the 2019 slate with an underwhelming .500 record, the Bears will look to return to playoff form during the long offseason ahead.