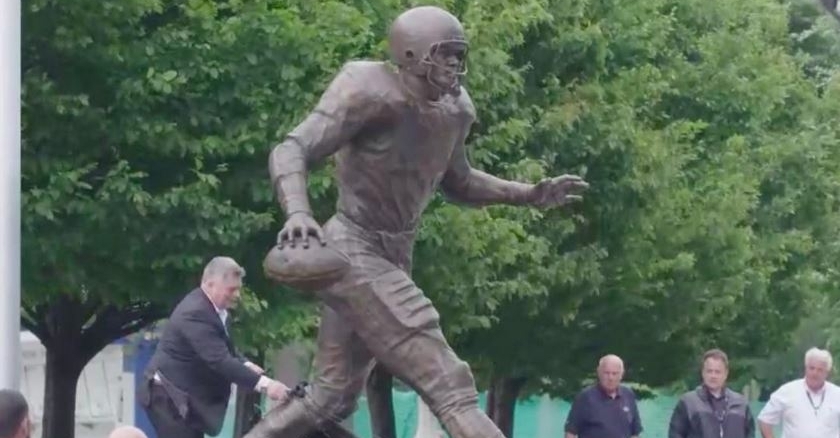 Despite the Bears lackluster and utterly disappointing season opener against the Packers at home on the 100th anniversary of football and the Bears organization - there are positives to draw out.

Jay Cutler made his return to soldier field, the 1985 Bears made an appearance and were honored, and two things that were long overdue finally occurred: both George Halas and Walter Payton got some much-deserved respect.

The Bears unveiled statues of Papa Bear and the best Bear to ever live at Soldier Field ahead of the dud that was the first game of 2019.

Sweetness, went down as one of the best players ever- who unselfishly and humbly joked, stiff-armed and leaped his way into record books, the hall of fame, legendary status, and even the Bears’ only Super Bowl. A statue in both honor and remembrance was absolutely necessary in the midst of what seems to be a competitive breed of Bears football.

George Halas was essentially the Bears’ first owner/coach- hence the whole Papa Bear title. Halas is one of the greatest coaches of all-time and got some recognition he certainly deserved.

The Bears unveiling the pair of statues was absolutely a great idea, but it got me thinking who would be next or another candidate to be statues.

Would the Bears go way back in time and give Sid Luckman or Bronco Nagurski some status at Soldier Field.

Would they honor their other HOF running back in Gale Sayers?

Would the Bears present in statue form their rich history of Hall of Fame greatness in the middle of their defense, with Dick Butkus, Mike Singletary or Brian Urlacher getting some acclaim?

Would they statue the greatest tight end they’ve had, who also led the team to their first and only Super Bowl as the head coach..or should I say Da Coach, Mike Ditka?

Would they choose to statue some of the dynamic playmakers in glory, if they return to the team to Championship times?

Or would they leave Walter Payton and George Halas as the only statues Bears, thus cementing their legacy in statued form- an honor no other Bear would receive?

It’s not up to me, but gosh it’s fun to think about.