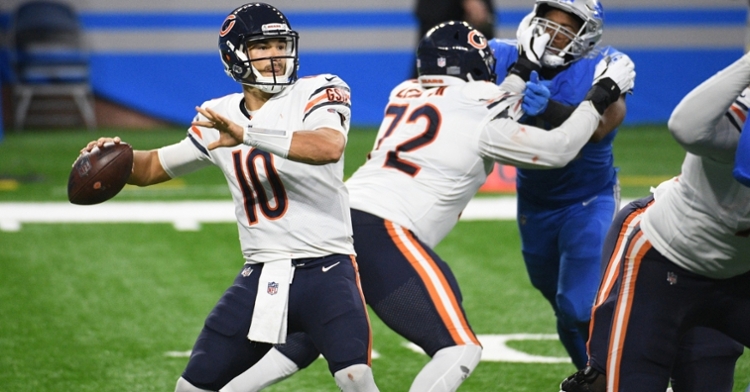 After practice, Matt Nagy announced that this week Mitchell Trubiksy will start for the second straight time against the Lions at Soldier Field on Sunday.

I think it is the right decision.

Despite the 16-point loss against Green Bay — although it felt like more — the Bears decided that Trubiksy earned another shot at QB, especially since Nick Foles is still recovering from a hip injury and Trubiksy’s mobility is valuable.

The loss wasn’t good, but the Bears’ offense put up the most points they had since week 3, the last game Trbiksy started. In addition to that, the Bears had their first 100-yard rusher of the year, and Trubisky threw three touchdowns.

The glaring number is the three turnovers the Bears offense had. Two interceptions were thrown into double coverage, and I will give Trubiksy the benefit of the doubt on the fumble because he was face masked twice on the play. Nonetheless, the Bears turning it over three times made the game hard to win.

But Trubisky owned his mistakes, and the team stood behind him — and will again this week against the Lions.

Here’s why the move makes sense. This weekend was the third-highest points the Bears have scored all year and the second-highest total yards the Bears have had since making the QB switch initially. It is not easy to throw a player you benched initially into a prime time game against a solid passing defense with no offensive line against the team’s arch-rival looking to break a four-game losing streak. No excuses though, that streak is now up to five, and here is the reason Trubisky will be the QB for the Bears to break it.

First of all, the Bears moved the ball well against the Packers. The Bears punted only twice in the entire game, both in the second half. Cleaning up on some of those mistakes likely gives the Bears a win if they’re playing any team aside from the Packers — and Trubisky has made it very clear that he knows the mistakes he made and is working hard to fix him.

In three and a half fewer games played than Foles, Trubisky has one more win, just one less touchdown pass, and has obviously taken less sacks and thrown fewer interceptions.

Here’s the other thing. The Lions have never beaten Matt Nagy, and Trubisky is 4-0 all-time against the Lions under Nagy. In those four games, Trubiksy has thrown for 12 touchdowns and just one interception. Not to mention the Lions have undergone a coach and GM change midseason because of how awful they have been.

Another week to build back chemistry with the receivers, get settled with the first-team offense, and reading another defense — mixed with Trubiksy’s track record against this week’s opponent (weaker than last week’s) should give the Bears all the ingredients they need to snap their losing skid and get back to winning ways on Sunday.