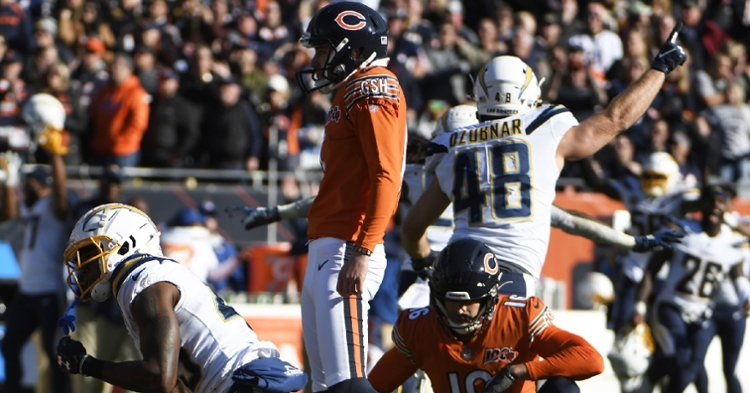 CHICAGO — Although Sunday's performance by the Chicago Bears (3-4) certainly left a lot to be desired, the kicking woes that have plagued the Bears for so long now overshadowed everything else in the losing performance. Falling for the third consecutive game, the Bears lost 17-16 to the Los Angeles Chargers (3-5) at Soldier Field, with a 41-yard field goal missed by Bears kicker Eddy Pineiro as time expired resulting in yet another disheartening ending to a Bears game brought on by an off-mark kick. The Bears outgained the Chargers by more than 150 yards and also converted 15 more first downs. However, the Bears went just 1-for-5 in the red zone and suffered a costly lost fumble, with an overall underwhelming performance in Week 8 ending in defeat.

Pineiro, who made a game-winning field goal earlier in the season, went 3-for-5 on field goals, and all three of his makes were shorter than 30 yards. Due to the Bears' inability to punch the football into the end zone, Pineiro kicked field goals of 22, 25 and 19 yards long, respectively, in the first half. The offensive woes elicited boos from the frustrated Bears fans in attendance, with the Bears entering the locker room at halftime to a chorus of boos, despite the fact that they led 9-7. Chicago could have potentially led by more at the intermission, but Pineiro boinked a 33-yard field-goal try off the right upright in the first quarter. The Chargers' lone scoring play of the first half came on an impressive 19-yard touchdown carry by running back Melvin Gordon.

As for the Bears' run game, which was fairly nonexistent in Week 7, it was solid against the Chargers, with the Bears compiling 162 yards on the ground. Rookie Chicago running back David Montgomery ran for a career-high 135 yards on 27 rushes and scored a 4-yard rushing touchdown in the third quarter that put the Bears ahead 16-7. Statistically, Bears quarterback Mitchell Trubisky was decent, as he tallied 253 passing yards on 23-of-35 passing. Trubisky struggled to make plays in the red zone, though, and committed two turnovers. The first one was an interception that led to a missed field goal for the Chargers. The second one, a fumble recovered by the Chargers in Bears territory, set the stage for what turned out to be the winning score.

Not long after the strip sack that caused the fumble, Los Angeles quarterback Philip Rivers threw an 11-yard touchdown pass to running back Austin Ekeler, which provided the Chargers with a 1-point edge at the 8:04 mark of the fourth quarter. In crunch time, Chicago was able to get into field-goal range by way of a two-minute drill. Trubisky avoided a sack and scrambled to the Chargers' 21-yard line before taking a knee on the next play. The kneel-down positioned the ball in the middle of the field and was followed by Pineiro's ill-fated 41-yard attempt, which was wide left. Chicago could have potentially tried to advance farther down the field before sending out Pineiro, but that is one of many what-ifs that will haunt the Bears in the wake of their 17-16 loss.