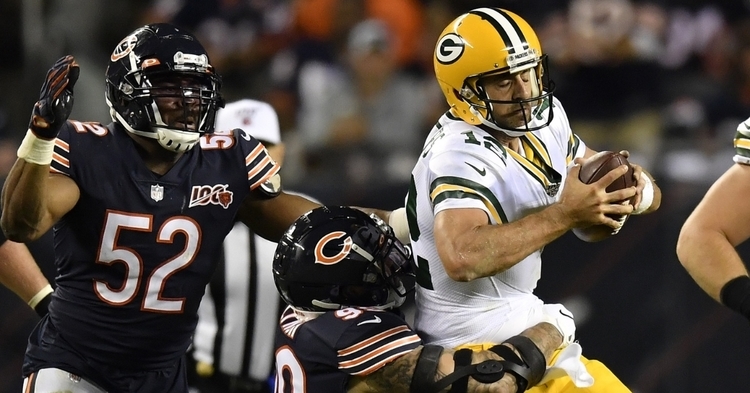 After yet another week of the NFL season, we at DaBears HQ took a look around the NFL and put together a new edition of power rankings. There is a huge shakeup in the rankings after week 10. Spoiler alert: there’s a new number 1.

We decided to explain just a few of the rankings.

1. Ravens- The Ravens sit at 9-2 after twelve weeks, coming off an extremely impressive win over the Seahawks and a dominating defeat of the previous number one Patriots, and a whooping of the Deshaun Watson led Texans. The most recent aspect of the Ravens run? It was thumping the Rams on Monday night football. Lamar Jackson looks like the clear an MVP, and the Ravens D is improving weekly, a very scary team in the AFC.

2. 49ers - The 10-1 Niners have proven they are legit as can be but are also beatable. Big plays defensively from Richard Sherman and Nick Bosa mixed with a good game plan offensively has kept the 49ers at the top of their division. Jimmy G is proving he can win games for the Niners, allowing them to be a more balanced team. A very telling domination of the Packers on Monday night football is enough to bring the 49ers to No. 2.

3. Patriots- The 10-1 Patriots fall out of number two after winning — a week after somehow ending up back at number 1 after getting blown out by the Baltimore Ravens. The defense is still great, and the team is still lead by Brady and Bellichick so I wouldn’t hit the panic button just yet, why would you? But the Patriots just don’t win games as telling as the Ravens and 49ers do, so they are just behind.

4. Saints- The Saints have looked even better than before with Drew Brees back under center but had a hiccup against the Falcons last week. The Saints recovered to beat the Panthers and have a chance to clinch the division this week. The Saints seem to be one of the best teams in the NFC and have backed that up by beating good teams. They have those pesky Falcons on hand this week.

5. Seahawks- Russell Wilson looks like an MVP so far, and the recipe the Seahawks have has led to a 9-2 start. They lost a tough one at home against the Ravens but rebounded against the Buccaneers and won a tight game in the division against the previously unbeaten 49ers before their bye and beating the Eagles after it. Keep an eye on the Seahawks in a very competitive NFC West.

6. Vikings- The Vikings have looked good against bad teams, but looked terrible in division games against the Packers and Bears. The offense looks great on their winning streak, but they failed to beat the Chiefs without Mahomes. The Vikings have a great roster and used it to its best on Sunday night against the Cowboys — a huge win for the Purple People Eaters. The Vikings followed that up with a huge come from behind win over the Broncos to bump up a spot before their bye.

7. Packers- The Packers have won their division games, lost a tough one against the Eagles, and responded by dominating the Cowboys, beating the Lions, crushing the Raiders, and beating the Chiefs on prime time. When it looked like the Packers would continue to separate themselves from the back, the Chargers dominated them - so they dropped in our rankings. Then the 49ers destroyed them, so they dropped again.

8. Chiefs- They have one of the best offenses in the league and one of the worst defenses. Mahomes continues to look like a generational talent that may get spoiled by a weak defense. The Chiefs have the talent to be a Super Bowl team but need to keep winning to stay in the top ten, which they did over the Chargers on Monday night.

9. Cowboys- After winning three games and then losing three, the Cowboys won a telling game over their division rival Eagles and followed that up with a big win over the Giants. Cowboys roster looks dynamic, and they need to continue to build on it, which they failed to do in primetime against the Vikings. Dak needs to stop taking losses where he played great and just go win games, and he did that against the Lions this past week. A road loss to the Patriots is nothing too serious, so the Cowboys stay where they are.

10. Texans- The Texans went into Kansas City and beat the Chiefs, but then lost a divisional battle with the Colts. They got back on track and won a close game against the Raiders. But the blowout against Baltimore has hurt them in our rankings for sure. They without a doubt have a big-time offense and contending roster, and they just need to put it together, they just haven’t done that yet. A win against the Colts to reclaim the AFC South is a good start for the Texans.

11. Bills- After a great start that looked like a playoff team, they have yet to have an impressive victory. The Bills keep losing the games against better than average teams — they may squeak into the postseason riding a light schedule, but they are not a team you should buy stock in. The Bills won a game over the Dolphins and then beat the Broncos, so they go back up to 11 in the fact that you have to respect the 8-3 record.

12. Colts- The Colts have looked great against good teams and also lost some games to teams they should beat. The Colts had huge wins over the Chiefs and Texans, but then lost to the Steelers and lost their QB during the game — Colts fallout of the top ten after a loss to the Big Ben less Steelers. But the Colts are back on the climb after a big win over the Jags but lost to the Texans to fall out of the division a bit. Health is what this team is missing right now, but that should come back soon.

13. Titans- Enough overlooking the Titans, an impressive win over the Chiefs mixed in with some tight games all year long— the Titans find themselves within striking distance for a potential playoff spot. Ryan Tannehill has done wonders for the Titans.

14. Raiders- Somehow someway, the Raiders keep winning behind a very good back in Josh Jacobs. The Raiders have beat the Bears among other teams, including the most recent win over the Bengals, and won a crucial one over the Chargers in primetime. Gruden has figured something out in Oakland but got sidetracked this week with a huge loss to the Jets. They have a considerable drop.

15. Browns- A nice winning streak and a favorable schedule ahead get the Browns into our power rankings. They will be without their best defensive player in Myles Garrett for the rest of the year (as they should), but the offensive prowess and the schedule coming up give the Browns a lane to the playoffs if they take it.

16. Steelers- After a disappointing start in the season, the Steelers found their stride and have rebounded by beating the Dolphins, Chargers, Colts, and Rams consecutively. A loss to the Browns hurt, but they beat the Bengals and have a chance to get revenge this week.

17. Rams- Rams won their first three, lost the next three, and just won their seventh game of the year. The next few weeks will be huge in defining their season. The Rams have only been too inconsistent to climb the standings and have hung around .500. A big win over the Bears where Gurley was great is an excellent place to start, but they were sidetracked big time when the Ravens pummeled them on Monday night football.

18. Panthers- The Panthers are in every game, except the blowout they took from the Falcons this past week. This game against Saints was no different, in the game, but not good enough to win. McCaffrey is outstanding, the defense is coming together, and this looks like Kyle Allen’s team — despite the struggles.

19. Eagles- Roster wise the Eagles can compete for a Super Bowl, not to mention the Eagles beat the Packers in Green Bay and throttled the Jets. They had a few tough losses but earned a much-needed win over the Bills in Buffalo and beat the struggling Bears at home. The Eagles have needed to game plan efficiently against good defenses, and have kept pace with the Cowboys. The Eagles are a game behind the Cowboys now after losing to the Pats and the Seahawks. They can not keep hoping the Cowboys lose, and they need to start winning.

20. Bears- The defense is still near the tops on the NFL, but they have been on the field way too much. The Bears have been disappointing all year long on the offensive side but looked better against the Lions and Giants. Head coach Matt Nagy continues to make questionable calls left and right, plus the Bears have a steep road ahead as they attempt to get back into the playoff picture. But without the help they need, they can’t get into the postseason without winning. They play the Lions on Thanksgiving.

The rest of the teams