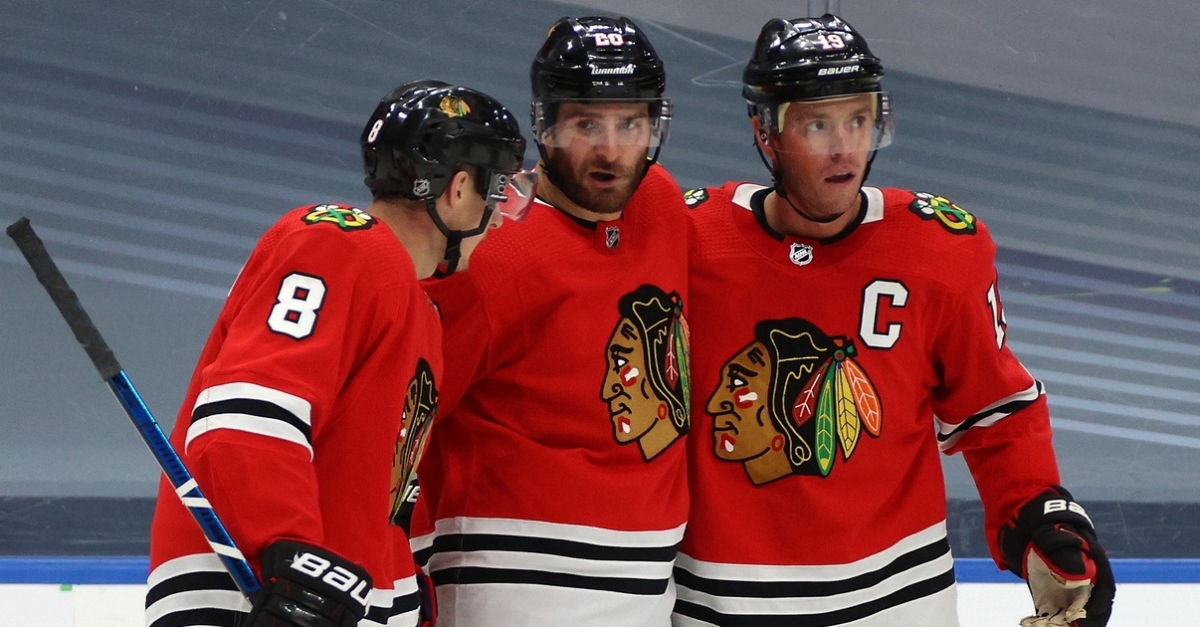 I am willing to admit when I am wrong, and boy was, I wrong about the Blackhawks chances against Edmonton in this series. Not only did I think Edmonton would sweep them, but if the two teams got involved in a high scoring affair, the Oilers certainly had the advantage. Not only will the Blackhawks not get swept, but they proved they can score with the best of them using a four-goal first period to seize control and take game one of the best of five series 6-4.

If you want any shot of beating the Oilers, you must slow down the dynamic scoring duo of Connor McDavid and Leon Draisaitl. Both combined to score more than 200 points this season as they led the way for the Oilers all season. It took less than three minutes into the game for that paring to cause issues as the Oilers took advantage of an early power play with McDavid putting one home for the 1-0 lead. Draisaitl and Oscar Klefbom were in on the assists.

That was about the only excitement the Oilers would have over the next two periods as it was all Chicago from there. Not even six minutes into the game, Dylan Strome evened things up with an unassisted goal before Jonathan Toews gave the Blackhawks the lead for good with a power-play goal at the 7:56 mark. Not even two minutes later, Brandon Saad got in on the action before Towes picked up his second goal of the night, capping off a stretch in which the Blackhawks scored four goals in less than 10 minutes to jump in front 4-1. Dominik Kubalik was credited with three assists in the first period.

Much like the first period, Edmonton came out with more physical play leading to them controlling the first few minutes of action. Like in the first, the Oilers were gifted with an early Power play opportunity as this time, Draisaitl’s turn to light the lamp with McDavid and Ryan Nugent-Hopkins in on the assist making it 4-2. Not only were the Blackhawks not fazed, but they answered just over two minutes later when another Power Play opportunity proved to be the difference with Kubalik scoring his first goal and fourth point of the night for the 5-2 lead.

Power Play goals were undoubtedly the story of the night, and if one Power Play goal weren’t enough, then two certainly would be. With just under three minutes to go in the second, Duncan Keith began controlling the puck from the defensive end before passing it to Towes, who was directing traffic. An open Kubalik was waiting for the pass as he found the back of the net for his second Power Play goal of the period giving the Blackhawks a commanding 6-2 lead after two.

With just 20 minutes standing in their way from a huge game one win, the Blackhawks gave goaltender Corey Crawford a nice cushion to work with as they were looking to end the game in style. Instead, Chicago seemed a little lackluster in the final period as there wasn’t much they could do on the offensive end, putting more pressure on Crawford and the backline.

After standing tall much of the night, Crawford found himself in trouble with under five to play. Out of the ten goals scored on the night, six came off a power play, which was exactly the case for the next Edmonton goal from James Neal to make it a 6-3 game. Not even a minute later, Edmonton was on the attack again as this time, Nugent-Hopkins turned to light the lamp with McDavid and Klefbom in on the assist, and suddenly it was 6-4 game.

That would be all the closer the Oilers would get on the afternoon as Crawford was able to stand tall in the pipes the final three minutes to hold off a few more Edmonton rushes to give the Blackhawks a huge game one win 6-4. The Chicago offense certainly tested the Oilers defense hoisting up 42 as opposed to 29 against.

MVP Player: Kubalik was the man of the day for the Blackhawks picking up a pair of goals to go with his three assists as part of a five-point night. Towes added three points with his two goals and an assist with Saad grabbing two points also. Crawford stopped 25 of 29 shots in the victory. As expected, the Oilers were led by McDavid, who tallied a team-high three assists to go with his one goal with Nugent-Hopkins adding one goal and two assists of his own. Mike Smith started the game in goal, allowing five on 23 shots before Mikko Koskinen came in relief, allowing one goal on 19 shots.