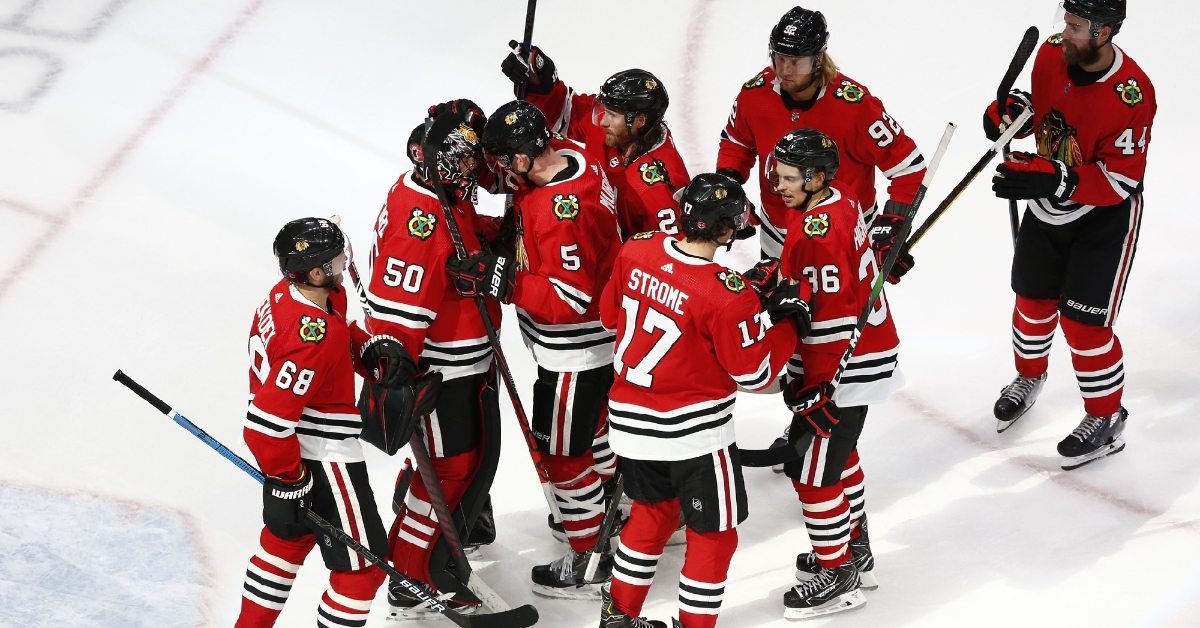 With their backs against the wall Sunday night, the Chicago Blackhawks were looking to get the right mindset back once again. Down 3-0 in the best of seven quarter-finals, it was a win or go home attitude. Only 60 minutes stood between the Blackhawks either extending the series or going home, and it was Corey Crawford putting the team on his back in this one. After stopping 19 of 20 first period shots to set the tone, Crawford delivered his best game of the postseason collecting 46 saves as the Blackhawks force game five following a 3-1 win.

If you break down the statistics from the first period, you would think the Blackhawks were down three-plus goals. Not only did Vegas outshoot Chicago 20-8 in the opening frame, but they controlled the pace of play throughout as it looked like another long night for Chicago. Fortunately for the men in red, they made those eight shots count with Drake Caggiula netting his first goal of the postseason just four minutes in with Matthew Highmore making it 2-0 at the 13:40 mark.

Crawford had a fantastic first period taking the best shots from the Golden Knights and standing tall throughout the period. His lone blemish in the period, which happened to be his lone blemish of the night came just 18 seconds after the Blackhawks picked up their second goal. With Ryan Reaves and Alec Martinez passing the puck around, Shea Theodore opted to shoot the puck and buried it home for his fourth of the postseason cutting things to 2-1 as the first period ended.

Although no goals were scored in the second period, Chicago still had to deal with a barrage of shots as Crawford was a man on a mission. Despite taking another 10 plus shots on goal this period, Crawford did not allow a goal as he was able to match Robin Lehner shot for shot in the second to post a scoreless period sending the game to the third up 2-1.

After dropping game three 2-1, Chicago knew this game was not over as Vegas has the firepower to score in bunches. Early in the third, neither team panicked, as there was still plenty of time on the scoreboard. That didn't stop Vegas from dominating the shot category as they continued to double the Blackhawks output on goal.

With all those shots coming at Crawford and the defense consistently on their heels, you would think that more of those shots would go in. That was not the case with Crawford stopping nearly everything in sight and leaving the Golden Knights scratching their heads as to what they needed to do to put one home. Still down by a goal and the game winding down, it was now or never for Vegas as they had 90 seconds to go until the final horn.

That 90 seconds went to 60 seconds as Lehner headed to the bench to add extra firepower on the ice. Searching for the perfect shot, we were down to the final 30 seconds with Chicago beginning to taste victory. With one last desperation offensive set, Vegas was circling the blue line as they looked to find a hole in the defense. Instead, it was a steal by the defense, which led to the empty-net goal from Alex DeBrincat with 11 seconds left, giving the Blackhawks a 3-1 win as they stay alive for at least one more game.

MVP: This was the easiest decision to make as Crawford was hands down the MVP of this one. Say what you want about his goals-against average this postseason, but Crawford has been outstanding considering the number of shots he faced. He has been outstanding the past two games, stopping 78 if 81 shots the last two games. 46 of those stops came last night with Crawford putting the team on his back and pushing them through to game five.

Hear from the man of the hour himself, Corey Crawford. #crOwMG pic.twitter.com/XmCMBRmHGr