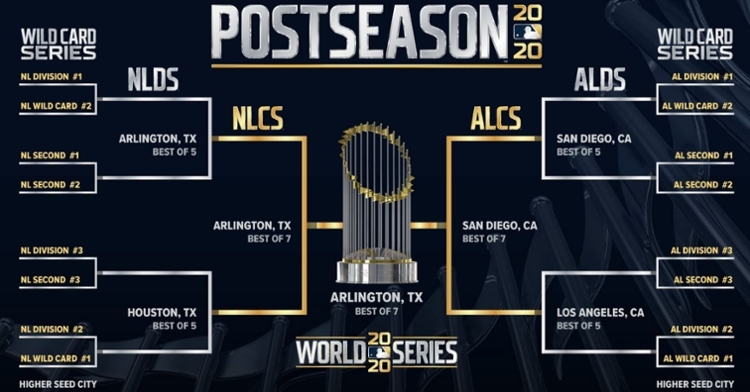 Major League Baseball today announced the schedule for the 2020 Postseason, which is set to open with the American League’s inaugural Wild Card Series on Tuesday, September 29th and the National League’s first Wild Card Series openers on Wednesday, September 30th. In the first neutral site Fall Classic in modern history, Game One of the 2020 World Series on FOX is set for Tuesday, October 20th at the new home of the Texas Rangers, Globe Life Field in Arlington, Texas.A potential Game Seven of the World Series is scheduled for Wednesday, October 28th.

The 2020 @MLB Postseason will begin with the AL Wild Card Series on Tuesday, 9/29, while Game One of the 2020 World Series at Globe Life Field in Arlington, Texas will be played on Tuesday, 10/20. pic.twitter.com/KSzWMSAcBk

• San Diego’s Petco Park will host the American League Division Series, which are presented by Utz, that features the matchup with the winners of the 1/8 and 4/5 Wild Card Series.

• Dodger Stadium will feature the ALDS with the winners of the 2/7 and 3/6 Wild Card Series.

Both best-of-five ALDS will be scheduled for Monday, October 5th through Friday, October 9th.

• Arlington’s Globe Life Field will host the National League Division Series, which are presented by Doosan, that includes the winners of the 1/8 and 4/5 Wild Card Series.

• Houston’s Minute Maid Park will feature the NLDS with the winners of the 2/7 and 3/6 Wild Card Series.

Both best-of-five NLDS will be scheduled for Tuesday, October 6th through Saturday, October 10th.

• San Diego will welcome the American League Championship Series, which is presented by GEICO, from Sunday, October 11th through as late as Saturday, October 17th. The ALCS will be exclusively telecast by TBS.

• Arlington will stage the National League Championship Series, which is presented by Camping World, from Monday, October 12th through as late as Sunday, October 18th. The NLCS will be exclusively broadcast by FOX or FS1.

All games telecast on FOX, TBS and MLB Network will be available to MLB.TV subscribers who are authenticated subscribers to the applicable network through a participating pay TV provider.

Cubs' playoff schedule if they were to keep advancing (Quintana/Chatwood alert):