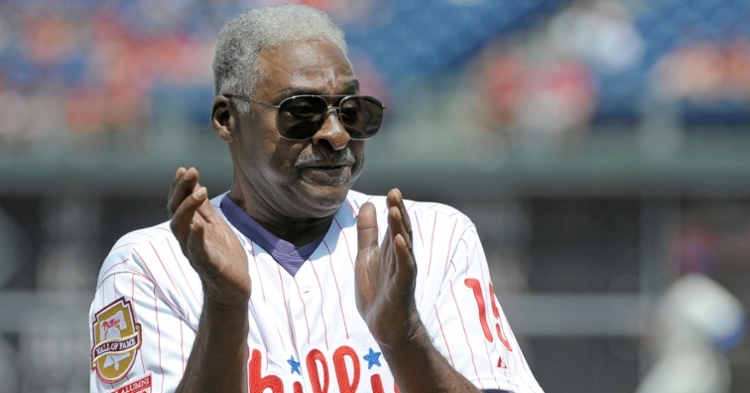 A 1994 inductee into the Phillies Wall of Fame, Dick Allen died today at the age of 78. Earlier this year, on Sept. 3, the Phillies retired his No. 15.

Allen first put on a Phillies uniform in 1963, when he entered the majors as a 21-year-old. He played nine years in Philadelphia over two separate stints. In 1994, he joined the club’s front office as a fan representative. Allen later became a club ambassador in November 2017.

Born Richard Anthony Allen on March 8, 1942, in Wampum, Pa., he was a graduate of Wampum High School. The Phillies signed Allen out of high school in 1960.

“I am bereft to learn of Dick’s passing today,” said Phillies Managing Partner John Middleton. “Our community’s powerful connection to, and pride in, Dick leaves all of us in a state of mourning. He will be remembered not only for his extraordinary baseball skills and accomplishments, but equally for his strength of character. His humility, gratitude and compassion were so evident when we retired Dick’s number just three months ago. I am grateful he was able to participate in the ceremony and experience the outpouring of affection and respect we have for him. Our hearts go out to Willa and the entire Allen family. We have lost a very good man, and he will be deeply missed.”

Allen became a member of the Philadelphia Sports Hall of Fame in 2010. In 2014, he fell one vote shy of getting inducted into the National Baseball Hall of Fame by the Golden Era Committee (needed 12 votes out of 16). He was supposed to be on the Golden Era ballot again this year, but the vote was pushed to next year.

Allen is survived by his loving wife of 33 years, Willa; two sons, Richard and Eron; and two brothers, Hank and Ron, who also played in the majors. He is predeceased by his daughter, Terri.

With sadness in our hearts, we need to share that Dick passed away this afternoon at his home in Wampum pic.twitter.com/BEIrcQlfRG

Dick Allen was an underrated player who dominated parts of the '60s and '70s. pic.twitter.com/uWtZ8QVdB1

We mourn the passing of Dick Allen, an MVP and a 7-time All-Star. He was 78. pic.twitter.com/rCXgOoNrRM