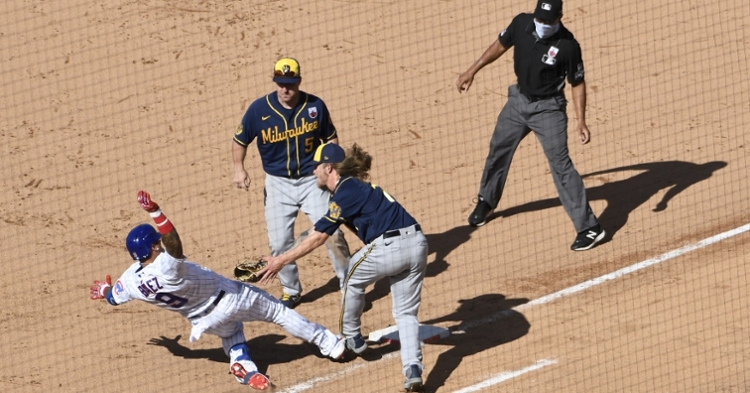 CHICAGO — Although it technically did not amount to anything, Chicago Cubs shortstop Javier Baez produced perhaps his top "El Mago" moment of the season thus far in the ninth inning of the Cubs' loss on Sunday. Baez did not start after going 0-for-14 in three straight games against the Milwaukee Brewers, but he made magic happen as a pinch hitter in the series finale.

With Brewers closer Josh Hader on the mound in the bottom of the ninth, Baez pinch hit with one out and hit a dribbler that Hader fielded on the first-base side of the infield grass. Hader raced over and stood in front of the bag, setting himself up for what had all of the makings of an easy tagout.

However, Baez concealed a new trick up his sleeve for Hader, and it nearly paid off. After juking Hader out on the basepath like a running back, Baez slid in feet-first and was initially called safe. The Brewers challenged the call, though, and it was overturned, as Hader was able to swipe "Javy" just before Baez's cleat touched the base.

Baez and Hader shared a laugh over the wacky play, but Hader had the last laugh when he finished off the Cubs for a 6-5 victory at Wrigley Field. The Brewers took three of four from the Cubs in the series, and Baez went 0-for-15 for one of the worst overall series performances of his MLB career. With that being said, even in the midst of a slump, El Mago provided fans with a magical moment.

Brewers challenge call that Javier Báez is safe at 1B in the 9th; call overturned, runner is out. Powered by @Mitel. pic.twitter.com/gO6PTp4Urm