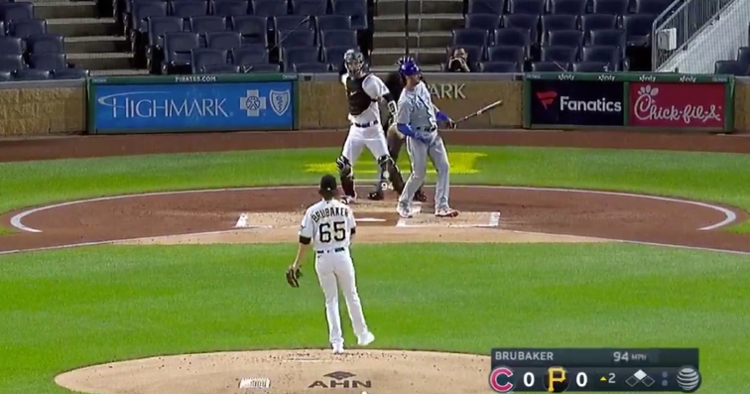 Kris Bryant showed discomfort after tweaking something on a swing and was removed from the game in the next inning.

PITTSBURGH — Chicago Cubs third baseman Kris Bryant was removed from Monday's contest at PNC Park against the Pittsburgh Pirates after tweaking something on a swing in the second inning. Bryant winced in pain after whiffing at the first pitch of his second-inning at-bat. Cubs manager David Ross and a trainer came out to check out Bryant soon afterward, and Ross opted to let Bryant finish the plate appearance.

Bryant ultimately grounded out, and, evidently, the pain did not subside. Prior to the bottom of the third, David Bote replaced Bryant in the lineup and took over at third base. Bryant has struggled with a litany of injury issues in recent seasons, including the 2020 slate, and has missed 20 games this year, most of which which he has missed due to injury.

Something clearly grabbed KB on this swing. After Bryant takes next pitch, Ross and a member of Cubs' medical team heads out for a chat.

Here is the swing in the 2nd where KB felt "tightness" in his right lower oblique. He completed the AB, but has been replaced by David Bote.@Cubs #GoCubsGo pic.twitter.com/ImNQmC8qjt

Kris Bryant leaves the Cubs game after tweaking something on a swing. Right arm/shoulder/side it looked like. Something over there

Update: The Cubs later announced that Bryant exited the contest due to tightness in his right lower oblique.