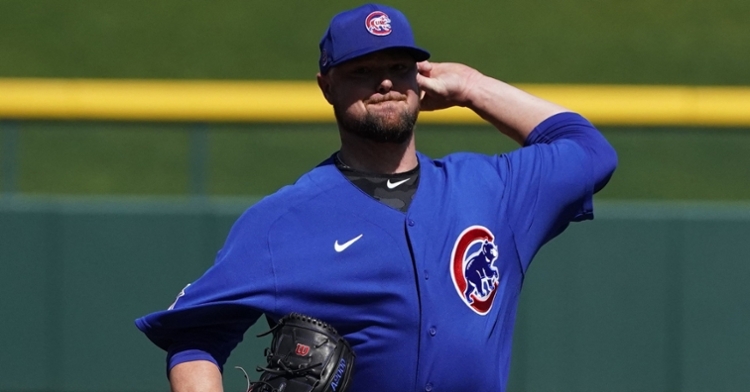 Big John will get his first start of 2020 vs. the Reds (Rick Scuteri - USA Today Sports)

It's road trip time for the Cubs!

The Cubs are coming off a series win against the Brewers at home while the Reds have dropped two of three from the Tigers.

When and Where: The Cubs (2-1) will take their first road trip of the 60-game season against the Cincinnati Reds (1-2) at Great American Ball Park on Monday at 5:40 PM CT.

Television: The game will be on the Marquee Sports Network and Fox Sports Ohio (Reds telecast).

Game Thread: Game discussion starts around a hour before gametime with senior writer Cole Little and writer Tony Crumpton in the replies to this article! Feel free to send in your questions or comments to all things Cubs. Fly the W! Join our free CubsHQ community...takes only 30 seconds.

Bring on the Cubs. #TakeTheCentral

Also, he has 27 homers against the Reds during his career#EverybodyIn pic.twitter.com/599BKuY1sp

He has also hit 12 homers against the Reds during his young career. pic.twitter.com/Hytvpx7mTc

#Cubs have zero errors in their first three games for the first time since 2005#EverybodyIn pic.twitter.com/dkfFAA5m9l

Kyle Schwarber in the DH spot tonight vs. #Reds

Schwarbs is the team's all-time leader with nine homers, 26 hits and 20 RBI at the DH spot pic.twitter.com/s08wbd1TRo

Kyle Hendricks named player of the week in the NL.

Happ said Cubs have talked about taking more precautions (facemasks on base paths), have been in contact with MLBPA, Reds.