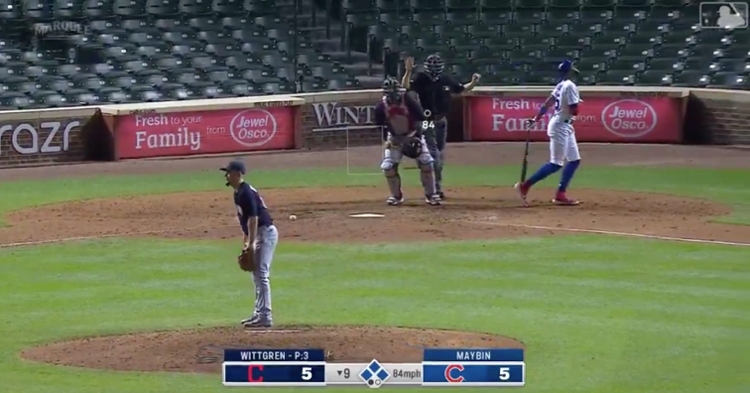 In the bottom of the ninth, Cameron Maybin was plunked with the bases loaded, gifting the Cubs a walkoff win.

CHICAGO — Cleveland Indians reliever Nick Wittgren hit batters on back-to-back pitches, and the Chicago Cubs won in walkoff fashion as a result. After the Indians tied Tuesday's game at 5-5 in the top of the ninth via a two-run homer by Francisco Lindor, the Cubs won 6-5 in the bottom of the ninth at Wrigley Field.

Cleveland reliever Oliver Perez toed on the rubber prior to Wittgren entering the game, walking Kris Bryant and giving up a single to Anthony Rizzo that advanced Bryant to third base. Wittgren relieved Perez and never seemed to have control, nearly beaning Willson Contreras in the head with a pitch before hitting his hand with another.

Contreras was not pleased after getting plunked, but Wittgren proved that there was no intent behind the HBP when he hit Cameron Maybin on the very next pitch. Maybin was dinged in his side by the pitch that got away from Wittgren, and Bryant was forced home, giving the Cubs a unique walkoff victory.