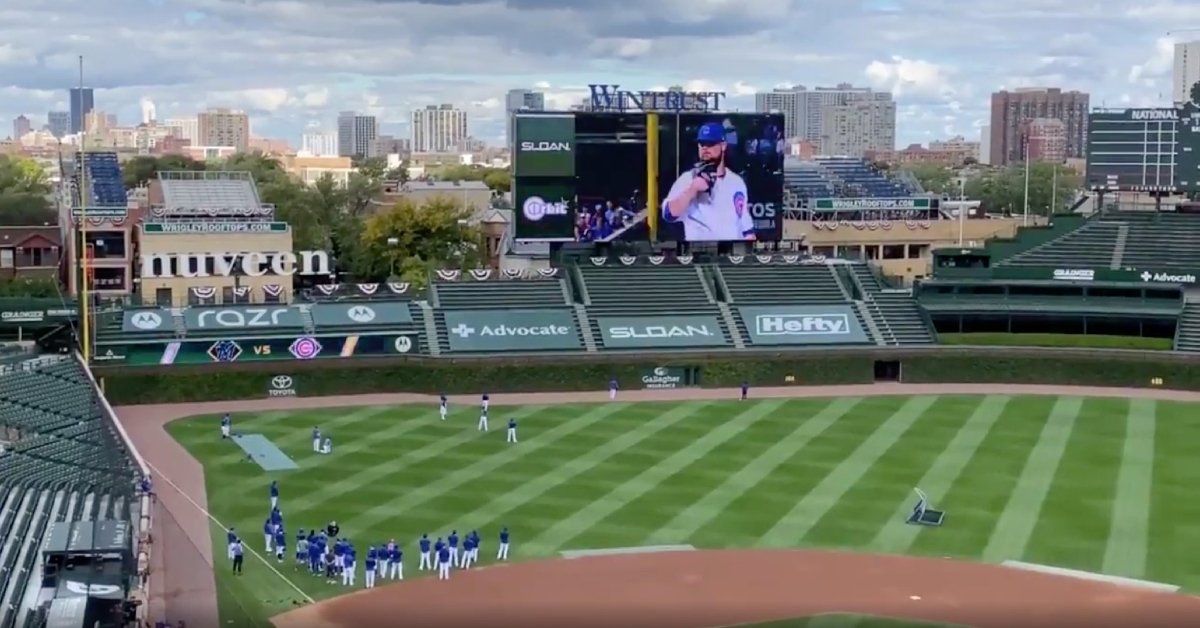 A Jon Lester tribute video narrated by Kyle Schwarber played on the Wrigley Field video board at a Cubs practice.

CHICAGO — Chicago Cubs workhorse Jon Lester has been a fixture of the Cubs' rotation since 2015. Combined with Joe Maddon becoming the Cubs' manager, the Cubs signing the left-hander arguably kickstarted the resurgence of the franchise and made the North Siders' journey to the 2016 World Series possible.

With that being said, Lester, now 36, might not be a Cub for much longer. His contract contains a $25 million option for 2021, the final year of the deal, and the Cubs' front office could decline that option with a $10 million buyout. It is expected that Cubs executives Theo Epstein and Jed Hoyer will look to cut down on player payroll and make the roster younger in the offseason, so Lester may be bought out and forced to sign elsewhere.

Lester is set to pitch Game 3 of the Cubs' National League Wild Card Series against the Miami Marlins, should it go three games, which could potentially mark his final start at Wrigley Field in a Cubs uniform. Therefore, the Cubs went ahead and played a tribute video for Lester at Tuesday's practice. While touching, the video is also funny, primarily because Cubs left fielder Kyle Schwarber narrates it.

Although his defensive gaffes have been few and far between these past few seasons, there was a time that Schwarber semi-regularly misplayed a ball in left, and, as fate would have it, many of the blunders occurred with Lester pitching. Therefore, Schwarber narrating the video and referencing how he has developed with Lester as his teammate adds a tongue-in-check element to the tribute. In addition, the mawkish song "I Will Remember You" by Sarah McLachlan plays behind Schwarber's narration.

The video is still quite sentimental and touching, though, and does signal that the Cubs are preparing for the possibility that Lester's Cubs tenure will end whenever the team's 2020 season ends. With their teammates applauding, Lester and Schwarber hugged it out after watching the tribute on the Wrigley Field videoboard, providing a fitting moment that followed a video that ends with Schwarber saying, "I love you, Jon."

Before workout, video plays of Kyle Schwarber saying how proud he has been to be Jon Lester’s left fielder. They share a hug afterwards as teammates clap. pic.twitter.com/MLeszzIXkv