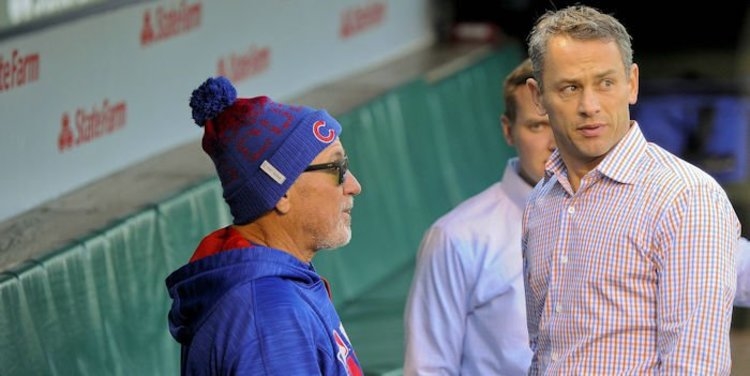 The Chicago Cubs today announced the organization has agreed to terms with Executive Vice President/General Manager Jed Hoyer and Senior Vice President/Scouting and Player Development Jason McLeod on contract extensions through the 2021 campaign. Terms of the deals were not disclosed.

“Jed and Jason are simply the best at what they do and have played fundamentally important leadership roles in helping the Cubs build a healthy and thriving organization,” said Theo Epstein, Cubs President of Baseball Operations. “We feel honored to have the stability and support that we enjoy throughout Baseball Operations and look forward to many years of working together in Chicago.”

Both Hoyer and McLeod originally joined the Cubs on November 1, 2011 and, along with Epstein, have helped lead an organizational rebuild at the major and minor league levels. In the major leagues, the Cubs have seen a 40-win improvement from year one in 2012 to today while in the minor leagues, the Cubs improved to the consensus number one system in all of baseball by the 2015 campaign. The Cubs are just the third team in major league history to win at least 100 games within four years of a 100-loss season.

Under this baseball operations leadership, the Cubs have now qualified for post-season play in consecutive seasons for only the third time in franchise history, while the 2016 team, with the best record in all of baseball, was assembled with a blend of major league free agent signings such as Jon Lester, Jason Heyward, Ben Zobrist and John Lackey; amateur draft selections such as Kris Bryant, Kyle Schwarber and Albert Almora Jr.; international signings such as Jorge Soler; trades to acquire players such as Anthony Rizzo, Jake Arrieta, Addison Russell, Dexter Fowler and Kyle Hendricks; Rule 5 Draft selection Hector Rondon; and hiring 2015 N.L. Manager of the Year Joe Maddon.

Prior to joining the Cubs, Hoyer had spent the previous 10 seasons working in major league baseball for the Boston Red Sox (2002-09 with Epstein) and San Diego Padres (2010-11 with McLeod). He was named San Diego’s eighth general manager in franchise history on October 26, 2009 after eight seasons with the Red Sox, where he departed as the club’s senior vice president/assistant general manager. Hoyer’s stint in Boston also included a 44-day stretch as co-General Manager during the 2005-06 offseason.

Hoyer began his major league career with the Red Sox and was actively involved in player development, major league scouting, quantitative analysis and advance scouting. He was a member of the front office that won a pair of World Championships (2004 and 2007), advanced to four League Championship Series (2003, 2004, 2007 and 2008) and won 95 or more games six different seasons.

McLeod spent six years in the Red Sox scouting department before returning to San Diego after Hoyer was named general manager. During his two seasons as the club’s vice president/assistant general manager, McLeod also oversaw San Diego’s amateur scouting and player development efforts. During his first stint with the Padres (1994-2003), McLeod advanced to assistant director of scouting and player development before joining the Red Sox as the club’s director of amateur scouting prior to the 2004 World Championship campaign.

During his first stint with the Padres (1994-2003), McLeod advanced to assistant director of scouting and player development before joining the Red Sox as the club’s director of amateur scouting prior to the 2004 World Championship campaign.