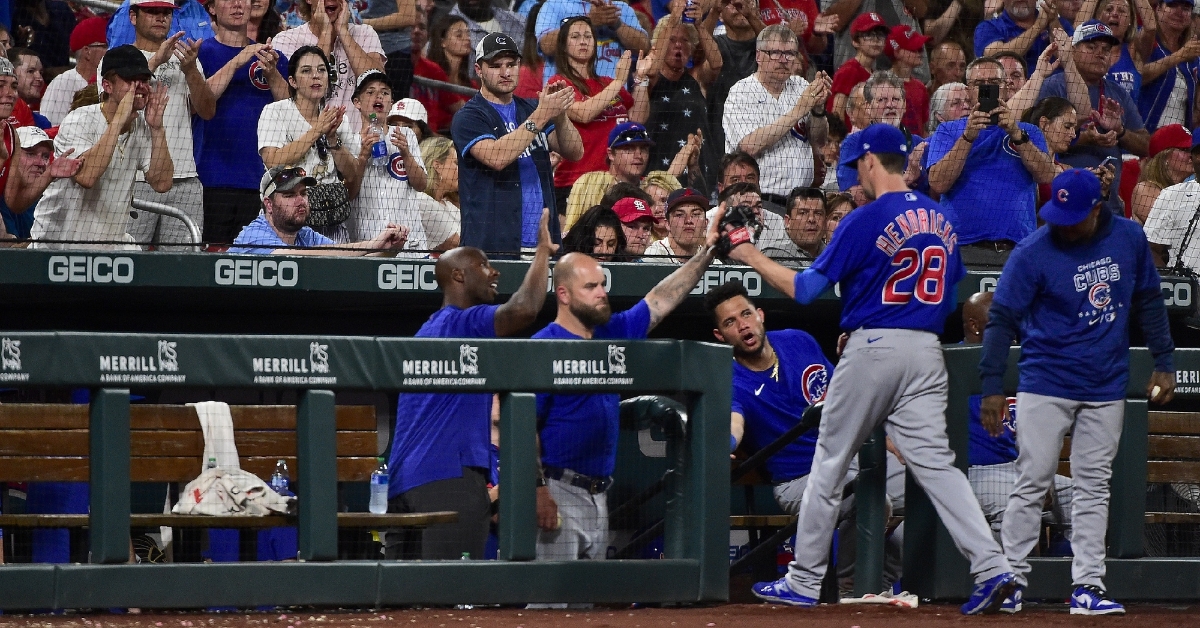 ST. LOUIS - Michael Jordan owned the 90's, Aaron Rodgers owns the Bears, and Kyle Hendricks owns the St. Louis Cardinals (40-33). At least it seems that way as the Chicago Cubs (27-44) right-hander was on top of his game at Busch Stadium.

Despite what has been a horrendous season in terms of Hendricks and his success, the one team he continues to pitch well against happens to be the Cardinals. Entering his start on Friday, Hendricks has posted a 12-3 record with a 2.84 ERA in 24 career starts against St. Louis. His mastery continued as Hendricks went 7 1/3 innings, allowing just five hits and striking out six in the Cubs 3-0 win.

He needed to be on top of his game as the Cardinals young right-hander Andre Pallante was making his fifth start of the season and second against the Cubs. Across his first four starts, Pallante has been solid as he had yet to allow more than two runs in any of those starts. The Cubs put an end to that in this one as he allowed three runs in six innings to take the loss.

Following a scoreless first, the Cubs offense not only struck first, but picked up all the offense they would need in the second. Former St. Louis first-round pick Patrick Wisdom started things off with a sharp single to left. Nico Hoerner and his two-run shot followed that to put the Cubs in front 2-0.

With Hendricks not allowing a baserunner until the fourth inning, it was that part of the Cubs order trying to make noise again with Hoerner and Yan Gomes setting things up with singles only to come away empty-handed in the end. That wasn't the case in the fifth inning, as the Cubs offense was looking to add to their narrow lead.

Christopher Morel got things rolling with a one-out walk and then reached second base on the Willson Contreras single. A few pitches later saw another Cardinal killer in Ian Happ come through, driving one to left-center field for an RBI double to make things 3-0. Throughout his career, Happ has hit a .464 against the Cardinals, which is by far his highest average against any team.

The Cubs would eventually load the bases in that fifth inning with a Hoerner walk, but Pallante managed to get out of the inning without any further damage. While 3-0 doesn't seem like that big of a lead, it is when Hendricks doesn't allow a hit until the fifth inning, which came with two outs off the bat of Tommy Edman.

That hit seemed to awaken the Cardinals offense just a bit as they picked up another hit in the sixth before mounting a huge rally in the eighth. Looking to finish off what he started, Hendricks ran into his only sign of trouble in the eight, with Dylan Carlson picking up a single before Harrison Bader ripped a double. That gave the Cardinals two runners in scoring position and no outs with the teeth of their lineup coming up.

Following a strikeout to Lars Nootbaar, Hendricks was lifted for Chris Martin, who finished things off to keep the Cardinals off the board for one more inning. With Nick Wittgren and Junior Fernandez doing their thing to keep the Cubs off the board in the final four innings, it was up to David Robertson to close things out as he was looking for his ninth save of the year.

Quickly emerging as the Cubs best reliever trade chip option, Robertson made quick work of Paul Goldschmidt and Nolan Arenado only to hit the next batter. That didn't bother him as he closed out the game by striking out Juan Yepez and the Cubs evened up the season series with the Cardinals 3-3.

The Cubs had eight hits in the win, with Hoerner and Gomes grabbing two to lead the way. The top six hitters in the Cubs lineup had all the hits and did all the damage in the win.