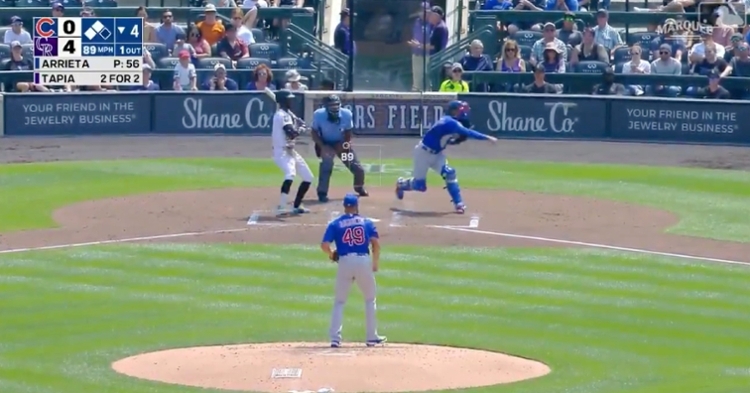 With the Cubs trailing the Rockies 4-0, Willson Contreras might have prevented the Rockies from adding to their lead with a perfect pickoff throw.

DENVER — Willson Contreras' cannon of a right arm was put to good use in the early goings of Thursday's contest at Coors Field. The Chicago Cubs catcher caught one runner stealing second base and gunned down another who was straying too far from third base.

Colorado Rockies left fielder Raimel Tapia was tagged out at second in the first, with Contreras firing a bullet to second baseman David Bote, who applied the tag. Contreras has now caught 10 runners stealing this season. Tapia, who had just hit a leadoff single, has 19 steals on the year.

In the fourth, Contreras picked off center fielder Yonathan Daza at third, with third baseman Patrick Wisdom tagging Daza out. The pickoff may have prevented the Rockies from putting together a big inning, as they boasted runners on second and third with one out at the time but failed to take advantage.

Willson Contreras throws to third to pick off Yonathan Daza for the second out of the 4th inning pic.twitter.com/H8YFC0Ip5T