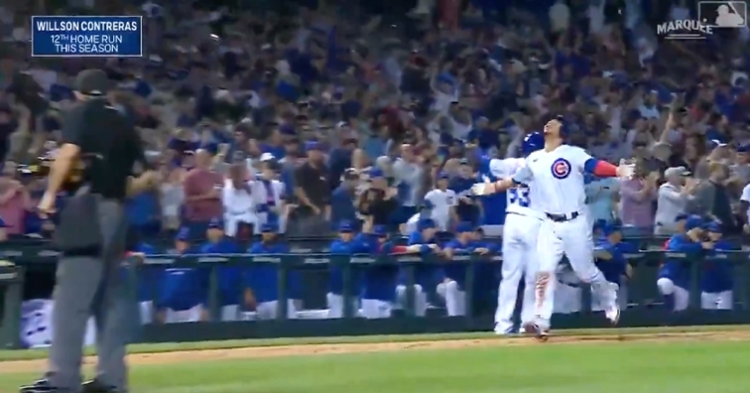 Willson Contreras hit the first of two back-to-back home runs for the Cubs in the eighth inning.

CHICAGO — Sending the Wrigley Field faithful into a frenzy, catcher Willson Contreras and third baseman Patrick Wisdom powered out back-to-back solo blasts for the Chicago Cubs in the bottom of the eighth on Tuesday. The dingers provided the North Siders with a couple of insurance runs, putting them up 7-1 atop the Cleveland Indians.

With two outs, Contreras belted a 97.6-mph four-seamer into the basket atop the center field wall for his 12th home run. He now has 28 RBIs. Wisdom homered just two pitches later, sending a 97.1-mph four-seamer 423 feet out to center. He now boasts 10 homers and 14 RBIs.

Reliever Trevor Stephan gave up both solo jacks. Contreras' sported an exit velocity of 105.8 mph and a launch angle of 31 degrees. Wisdom's left the bat 108.9 mph and 23 degrees. Earlier in the game, first baseman Kris Bryant powered out a go-ahead solo shot that snapped a 21-inning stretch of no home runs for the Cubs.