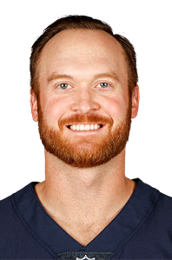 Has appeared in 71 contests as a long snapper for the Ravens (2014) and Bears (2015-20) during the regular seasons, recording two special teams tackles; also has played in four postseason games, two with the Ravens in 2014 and two with the Bears (2018, 2020)
Spent 2017 season on Injured Reserve after suffering a knee injury in the preseason
Appeared in 5 contests in 2015 (games 12-16) as the Bears long snapper after spending the preseason with Baltimore
In 2014 he appeared in two contests for Baltimore handling the long snapping duties; made NFL debut on Dec. 21 at Houston
Signed by Miami during the 2013 offseason but was released prior to training camp
Spent a majority of the 2012 offseason and training camp with Baltimore but was released prior to the start of the regular season
Entered the NFL with Baltimore as an undrafted free agent out of Utah State
Spent training camp with the team but was released prior to the start of the regular season