It looks like you are using an ad-blocker. You may not have realized, but our team is mostly supported by ad revenue. ChicagoSportsHQ provides free Chicago Sports news coverage and updates 24/7. Help us keep doing that by turning off your ad blocker or joining our ad-free membership level. Thank you!
Go Ad-Free! Continue browsing ChicagoSportsHQ with your adblocker active with a monthly or annual Blue Level membership.
Allow sponsors to pay for your browsing Disable your adblocker on ChicagoSportsHQ and ads will fund your browsing.
Already an Blue Level member? Please Login | Need help? Contact support
BREAKING
Bull at Raptors game postponed 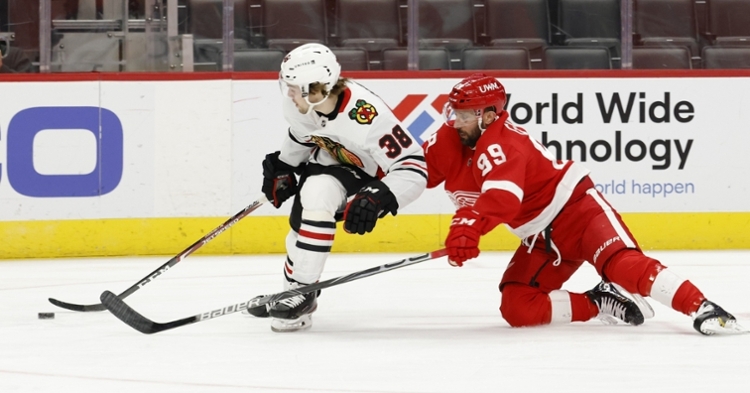 Blackhawks have been impressive in 2021 (Rick Osentoski - USA Today Sports)

If the Chicago Blackhawks could choose any opponent to see the rest of the season, Detroit would be the choice. Entering Wednesday with a perfect 3-0 mark against the struggling Red Wings, Kevin Lankinen took to the ice, hoping to keep the perfect record alive.

For the second straight night, the Red Wings led in the shots department, but this time it was a much closer affair. Despite the Wings getting 29 shots off against Lankinen, it was business as usual, with the netminder keeping all 29 shots in front of him and helping the Blackhawks improve to 4-0 against Detroit with a 2-0 win.

Despite owning the worst record in the Central Division, the Red Wings have been getting strong goaltending play, especially from Jonathan Bernier. Wednesday was no different as he stopped 24 shots but was given zero offensive support. Even with the Red Wings owning the shots department in the first period, only Robby Fabbri was able to generate quality looks on Lankinen. Still, all was for nothing as the teams played to 0-0 draw after one period of play.

The second period was shaping much like the first period despite the Blackhawks getting more aggressive on the offensive end. Even with more shots coming Bernier's way, he was able to match Lankinen shot for shot, helping to keep things scoreless for the time being. It took over 30 minutes for someone to crack the scoreboard, but that is precisely what happened in the 12th minute.

Being awarded a powerplay, Chicago looked to capitalize as their unit has been one of the NHL's best. On the flip side, Detroit is much improved in penalty kills but still finds themselves sitting in the middle of the road. After Lankinen cleared the puck away from his net, Duncan Keith skated down the ice towards the Red Wings zone. Looking for an open man, Keith played the puck off to Philipp Kurashev, who put it home for his fifth season goal. Keith earned his sixth assist on the play as the Blackhawks now led 1-0.

Chicago was able to hold on to the one-goal lead despite the Red Wings getting some strong scoring chances down the stretch. With just 20 minutes to go from securing two points, the Blackhawks were in familiar territory in more ways than one. First, having a lead in the final period has not been an issue, but sometimes holding onto that lead has been a problem.

Secondly, playing overtime hockey is something Chicago has been accustomed to, so anytime there is a one-goal lead you are hoping for some insurance. Through the first 15 minutes in the third, that insurance was nowhere to be found as both goalies continued to take their best shots on goal. With time winding down, Detroit needed another goal, so it was time to go with an extra skater the rest of the way.

Knowing this, Lankinen needed to be on his toes as the defense had yet another offensive threat to contend with. Fortunately, Lankinen wasn't allowing anything to get through, but with 70 seconds left, Detroit still had time to draw even. Instead, Patrick Kane corralled the puck and played it to Alex DeBrincat, who scored his ninth goal in the open net season. It was also Kane's team-leading 12th assist as the Blackhawks took care of business 2-0.

With the win, the Blackhawks improve to 9-5-4, but more importantly, their 22 points land them in the first place along with Florida. These two teams will meet again in about a week, with their final meetings set for early April. The Blackhawks look to remain in the first place when they face Carolina for a pair of weekend games.