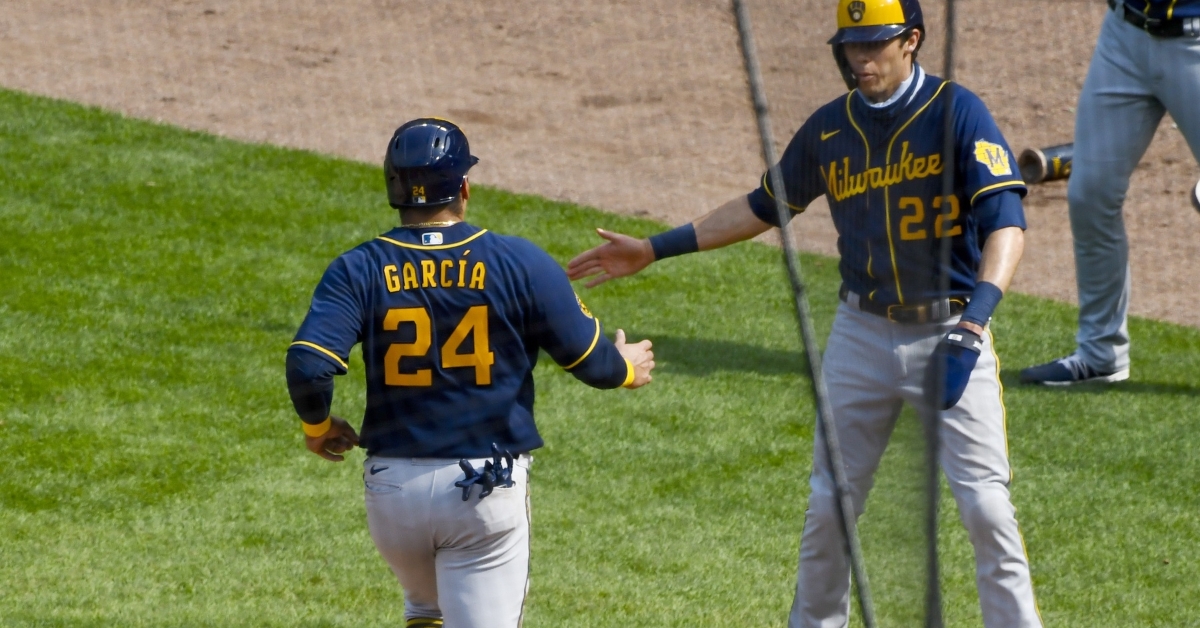 CHICAGO — Suffering back-to-back losses for the first time on the season, the Chicago Cubs (13-5) lost their second straight to the Milwaukee Brewers (9-10) on Saturday. In a game that was moved to an earlier start time due to the threat of nighttime rain, the Brewers and the Cubs went to extra innings at Wrigley Field.

The Brew Crew plated two runs in the top of the 10th, and the Cubs were able to muster just one run in the bottom of the 10th, falling 6-5. Anthony Rizzo and Steven Souza Jr. each hit first-pitch solo home runs on the afternoon, but the Cubs went 1-for-9 with runners in scoring position and blew an early 3-0 lead.

T1: With Alec Mills forced to start on Friday because of an injury suffered by Tyler Chatwood, Colin Rea made his first start on the mound as a Cub on Saturday. The outing marked Rea's first start in the big leagues since 2016, and he began on the right foot by forcing three groundouts in the opening frame.

B1: Swinging at the first pitch he faced, Rizzo hit his fifth home run of the year to the opposite field, with the 357-footer clanging off the inside of the basket atop the left field wall. The burly first baseman was fired up, as he motored around the basepaths in a hurry. Adrian Houser started on the bump for the Brewers, and he did not fare well out of the gate. After issuing a pair of two-out walks, Houser gave up an RBI double to Ian Happ that rolled to the wall in left. A run scored, and a subsequent walk loaded the bases. Houser then escaped the jam by forcing Victor Caratini to ground out.

B2: Jason Kipnis was able to reach base on a bunt toward third base. A few at-bats later, he scored when Rizzo lined a double into the gap between left and center.

T3: The Brewers were sat down in order in the third.

B3: Happ doubled to center field with one out but was left stranded.

T4: Rea was yanked in the fourth after giving up three hits in a row with one out. Two singles were followed by a two-run double off the bat of Justin Smoak. Having throw 49 pitches in a start that he made on short notice, Rea departed the ballgame and was replaced by Ryan Tepera. An unlucky defensive break for the Cubs contributed to the Brewers knotting the score at three runs apiece. Luis Urias smacked a hard-hit grounder that third baseman Kris Bryant, who returned to action after missing two games, lunged at but was unable to glove. The ball then dribbled underneath shortstop Javier Baez's glove and into the outfield, enabling Smoak to score. Next, with two outs and runners on first and second, Tepera drew a groundout.

B4: Houser needed 25 pitches to record three outs, but he kept the Cubs from reaching base in the fourth. A well-hit liner off Rizzo's bat was snagged between first and second by Sogard, who started at third base but was in the right place at the right time because of an effective defensive shift.

T5: Kyle Ryan toed the rubber in the top of the fifth and issued a couple of walks with two outs before striking out Smoak.

B5: Houser continued his turnaround by drawing three groundouts on four pitches in the fifth. A mound visit by Brewers skipper Craig Counsell in the early goings seemed to get Houser on track, as his body language and command were much improved thereafter.

T6: Casey Sadler pitched for Chicago in the sixth and gave up a leadoff double to Braun. Following a one-out walk of Urias, a wild pitch by Sadler advanced the runners. Kipnis then let a grounder roll past him at second. Braun scored as a result of the error, putting Milwaukee in front. Sadler limited the Brewers to just one run in the inning.

Arcia sneaks that one through and the #Brewers take the lead!#ThisIsMyCrew pic.twitter.com/p9kCQNWFBt

B6: Brent Suter relieved Houser prior to the bottom half of the sixth. He gave up an infield single to Jason Heyward but kept the lead intact. Souza pinch hit for Caratini in the inning, thus becoming the new designated hitter, and struck out.

T7: Reliever Dan Winkler recorded a 1-2-3 inning in the top of the seventh.

B7: Rizzo and Kyle Schwarber singled off Suter in a scoreless inning.

T8: Winkler gave up a two-out base knock to Urias and then drew a lineout.

B8: With two outs, Suter was relieved by Corey Knebel, which worked in the Cubs' favor. After having limited success batting against Suter, the Cubs wasted no time in getting to Knebel, as Souza made contact on Knebel's first pitch and sent it over the wall in left for a game-tying homer. The 369-footer, which landed in the basket, was just fair down the left field line and served as Souza's first dinger in a Cubs uniform. Kipnis drew a walk after that, but Nico Hoerner pinch ran for him and got thrown out on a steal attempt.

.@SouzaJr's first #Cubs home run is a big one! pic.twitter.com/k3iQomTviH

T9: Former Brewer Jeremy Jeffress pitched the ninth for the Cubs and needed only 10 pitches to record three outs.

B9: Bryant led off with a single against former Cubs pitcher David Phelps. Baez grounded into a fielder's choice later in the inning and barely avoided being thrown out at first. Schwarber proceeded to strike out looking to usher in the top of the 10th.

T10: Due to the new extra-inning rules, Christian Yelich began the 10th on second. Avisail Garcia plated Yelich with a double hit into the right field corner off Jeffress. Happ, who was moved to left field at the beginning of extras, then made a great diving catch to rob Smoak of a hit. With two outs, Sogard singled, putting runners on the corners, and Urias drove Garcia home with an infield single. Baez showed great effort by gloving the grounder on the outfield grass, but he did not attempt an unnecessary throw with the speedy Urias racing up the baseline. A fielder's choice then brought forth the bottom of the 10th.

.@AvisailGarcia with a clutch double in the 10th and Brewers retake them lead! #ThisIsMyCrew pic.twitter.com/iFkNeH8RFh

Despite the loss, can we just admire this beautiful Ian Happ catch??

This man is locked in this year. pic.twitter.com/zCtFxrgJn6

B10: Albert Almora Jr. was placed at second base to start the half-inning. Willson Contreras lined out, and Almora tagged up and reached third. Almora then came home on a Happ groundout, waiting until the throw to first was made before darting to the plate. He slid in ahead of the tag and pulled the Cubs to within one. David Bote pinch hit for Heyward, representing the Cubs' last hope, and he struck out swinging to end the game. Alex Claudio earned the save. The North Siders are now 1-1 in extra-inning games this season.

Up Next: The finale of the four-game set at the Friendly Confines will take place on Sunday, Aug. 16, at 1:20 p.m. CDT. Expect warmy, mostly sunny conditions at the ballpark. The starting pitchup matchup will feature lefty Jon Lester (2-0, 1.06) of the Cubs facing off with Brewers righty (Josh Lindblom (1-0, 5.68).

The #Cubs fall to the Brewers in extra innings.