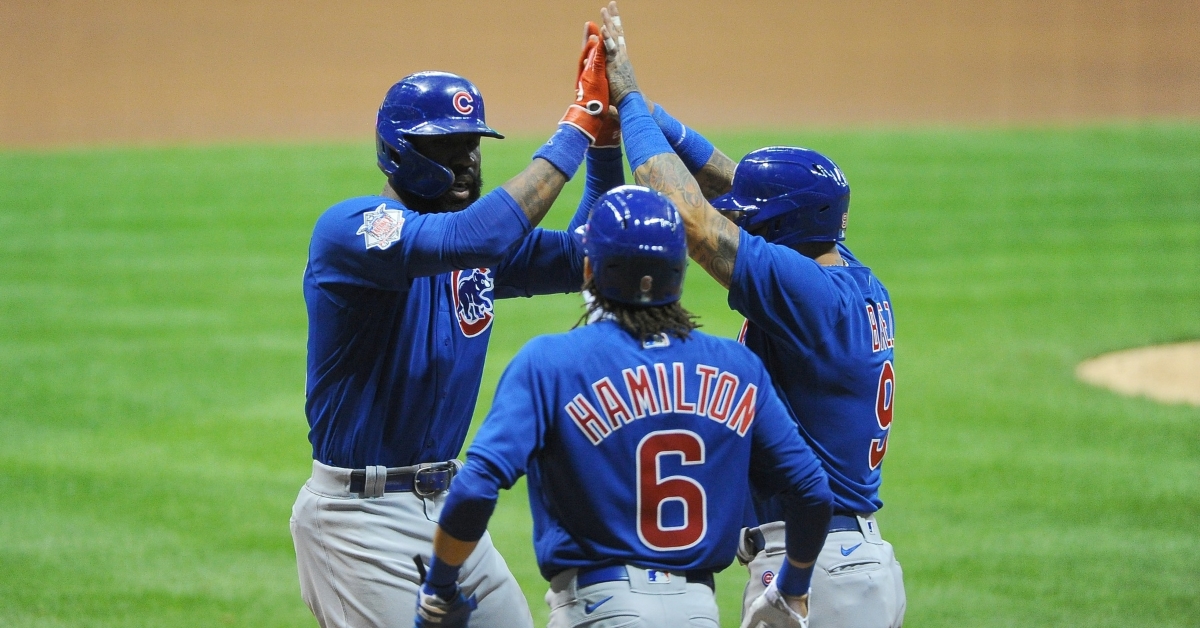 MILWAUKEE — En route to earning their unlikeliest victory of the season by producing a ninth-inning rally against the unlikeliest of pitchers, the Chicago Cubs (27-20) scored four runs after getting blanked for 17 consecutive innings against the Milwaukee Brewers (20-23). The Cubs were shut out in the series opener at Miller Park on Friday and were staring another shutout in the face before overcoming a 2-0 deficit in the top of the ninth on Saturday.

Brewers closer Josh Hader has dominated the Cubs throughout his career, but he was not his usual self when he entered Saturday's contest with a save on the line. With one out and runners on the corners Jason Heyward blasted a three-run shot out to right-center, and Cubs newcomer Ildemaro Vargas followed that with his first home run in a Cubs uniform. Unlike Hader, Craig Kimbrel did not blow a save, as he finished off the Cubs' 4-2 comeback victory with a scoreless bottom of the ninth.

T1: The Brewers' Brent Suter was a lade addition to the starting lineup, as he started on the mound in place of former Cub Brett Anderson. Despite pitching on short notice, Suter dominated in his three innings of work, beginning with a first inning that saw him strike out the side.

B1: Kyle Hendricks tossed 7 2/3 innings of two-run ball, in which he struck out seven. He gave up a two-out single in the opening frame but kept the Brewers off the scoreboard.

T2: Kyle Schwarber led off with a single, but the Cubs did not score.

B2: Former Cubs prospect Daniel Vogelbach hit a leadoff base knock before Ryan Braun grounded into a double play.

T3: Two groundouts and one strikeout made up the top of the third. Suter hilariously somersaulted on the mound after slipping and falling during the delivery of one of his pitches against Ian Happ. Suter laughed it off, though, and struck Happ out swinging to wrap up his successful three-inning stint.

He gets knocked down, but he gets up again.
You are never gonna keep him down.@Bruter24 I #ThisIsMyCrew pic.twitter.com/i5yFOdKRQq

B3: A two-out single by Avisail Garcia was all that Milwaukee mustered at the dish. Christian Yelich was rung up for the third out after watching a Hendricks four-seamer fly by.

Picasso on the corners ????? pic.twitter.com/oUw0m1Ey9b

T4: Freddy Peralta walked Kyle Schwarber with two away and then gave up a single to Javier Baez that moved Schwarber to third. David Bote struck out to leave both runners stranded.

B4: Following a two-out Vogelbach single, Braun crushed a 426-foot jack out to center field. The two-run homer occurred after Kris Bryant, who made a rare start at first base for the Cubs, tumbled over the partition and into the stands while failing to catch a foul ball off Braun's bat.

T5: Nico Hoerner singled with two away, but, other than that, it was nothing doing for the North Siders in the fifth.

B5: Hendricks worked a 1-2-3 fifth that included two strikeouts.

T6: Eric Yardley sat the Cubs down in order.

B6: Two lineouts and one groundout made for another three up, three down inning by Hendricks.

T7: Victor Caratini reached on a nubber hit onto the infield grass near the third baseline. He never made it beyond first base, however.

B7: Hendricks prevented the Brew Crew from reaching base in the seventh.

B8: Garcia tabbed a base hit off Hendricks with two outs, and Jason Adam then emerged from the bullpen to pitch. Adam struck Yelich out swinging to usher in the ninth frame.

T9: The ninth inning started off rather inauspiciously for Chicago, as Schwarber bunted foul with two strikes for the first out. Baez then tallied a base knock and motored to third on a single by Anthony Rizzo, who entered as a pinch hitter. The speedy Billy Hamilton pinch ran for Rizzo as the potential tying run, but his speed was not needed, as Heyward went yard. Down to his last strike, Heyward crushed a 416-foot three-run bomb that provided the Cubs with their first lead of the series and marked Heyward's first long ball of the season off a left-hander.

Vargas, a recent addition to the Cubs' roster, proceeded to sky a 401-foot solo shot to left for his first homer and RBI as a member of the Cubs. The only reason that Vargas started on the evening was because Cameron Maybin was a late scratch due to an illness, which caused the Cubs. to shuffle their starting lineup. Hader had never given up multiple two-strike home runs in an appearance before Saturday's contest. The fireballer was able to collect the second and third outs to escape the inning, but enough damage had already been done.

B9: Registering his first save since mid-August, Kimbrel collected himself after giving up back-to-back singles to begin the bottom of the ninth and prevented the Brewers from scoring. Kimbrel fanned Vogelbach and then drew a fielder's choice and a lineout to secure the Cubs' come-from-behind triumph.

Adam received the win to become 1-1, and, in addition to notching his second blown save, Hader was handed the loss to become 1-2. Kimbrel garnered his second save, and Brewers relievers Alex Claudio, Williams and Yardley all tallied holds. Claudio and Yardley have one hold apiece, and Williams has seven holds. Kimbrel attained his 348th overall save, surpassing Randy Myers for 12th on the all-time saves list. The Cubs had not homered for five straight games prior to going yard twice in the ninth inning on Saturday night.

Up Next: The finale of the three-game series, which will also be the final meeting of the regular season between the Cubs and the Brewers, is scheduled for 1:10 p.m. CDT on Sunday, Sept. 13. The roof at Miller Park might be open, as the Milwaukee forecast calls for warmth and sunshine. Cubs right-hander Alec Mills (4-3, 4.74) and Brewers right-hander Adrian Houser (1-4, 5.48) are penciled in as the starting pitchers.