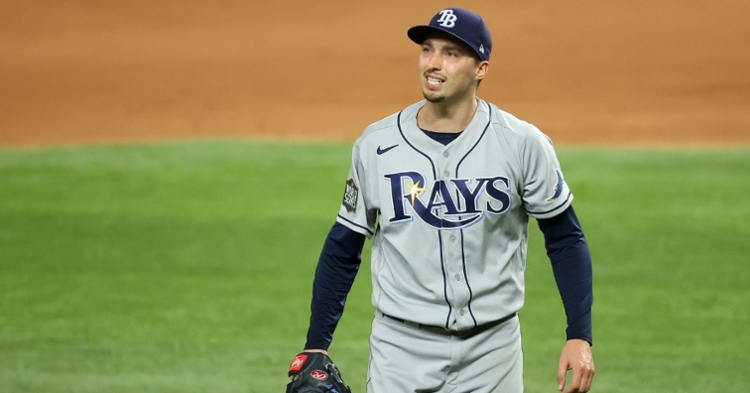 Blake Snell is a talented pitcher with the Tampa Bay Rays

Typically, this is the most exciting part of the MLB offseason as the Winter Meetings would generally be in full swing. This is the time when rumors, trades, or even big-name free agents tend to start singing as teams look to get a jump start on the next year. Granted, the Winter Meetings are still going on with this being day three, but given they are all virtual, it doesn't feel the same.

So far this offseason, the Cubs have been busy, but busy in a way fans didn't expect them to be. Everyone knew there would be some changes coming in, but so far, it has been subtraction by subtraction with no new moves on the horizon. The Cubs did tender contracts to several players, including Kris Bryant, but without bringing outside help so far, that was a done given.

The Cubs are at a crossroads right now as Jed Hoyer recently took over for Theo Epstein. He is in a tough place as he needs to figure out what to do with this roster and plan for the future. When it comes to planning, it could mean a partial rebuild or a full-scale rebuild, which this team needs to figure out. I think there are three things the Cubs need to solve heading into the 2021 season.

Starting pitching depth: First and foremost, the Cubs need to figure out what to do with their starting pitching. Chicago is fortunate to have both Yu Darvish and Kyle Hendricks under contract for three more seasons, so they should be able to anchor the top of the rotation for the foreseeable future. The rest of the rotation is where the problem lies.

After losing Jon Lester, Jose Quintana, and Tyler Chatwood through free agency, the Cubs have three spots that need to be filled in the next year's rotation. Sure, one of these three pitchers could come back on a cheap one-year deal, but I don't see that happening. The Cubs have in house options Alec Mills and Adbert Alzolay as potential options, but both are considered back end starters.

Alzolay showed a lot of promise after returning from South Bend last season, and he could be in line to break out as the team's No. 4 or No. 5 starter. Mills, on the other hand, had an up and down season despite tossing a no-hitter. While he is an excellent short-term solution, I like him better as a swingman filling in the Mike Montgomery role.

Ideally, the Cubs will most likely need two starting pitchers, but one for sure that they could pencil in as the teams No. 3. Lance Lynn would have been a great option, but he is no longer on the table after his trade to the White Sox. Rick Porcello is another option the Cubs could use, but with no lefties in the rotation, look for them to target at least one southpaw.

Impact/contact drive bats: Over the past few seasons, it has become abundantly clear that this team can't hit. I mean that they have an all or nothing approach and seemingly forgot how to put the ball in play. Fans have seen these hitters at their best, but the reality is this group may never get back to 2016 again.

When you look at the roster the team put together during that season, you immediately notice a few things. Chicago not only had a legitimate leadoff hitter in Dexter Fowler, but great contact hitters across the lineup with Ben Zobrist, Chris Coughlin, Kris Bryant, and Anthony Rizzo. Granted, two of those four are still on this team. Both Bryant and Rizzo don't seem to have that contact first mindset anymore.

The constant changing of hitting coaches may have had something to do with it, but these are still professional players who need to figure this out independently. I get the home run ball is super exciting, but I would take three or four consecutive hits to push across runs than wait for the big inning. This team is more than capable of doing that, but some new blood needs to help.

Knowing this, trading for Whit Merrifield is the perfect addition to this team. He can play the outfield, which the Cubs do have openings in, but he also can play second base, which was a problem last season. Not to mention he is a perfect leadoff hitter with speed, and he will give the Cubs something they haven't had in years.

If they are looking for contact first approaches in the free-agent market, you have Cesar Hernandez and Jonathan Villar as options. Once again, both players can play second base and give the Cubs a much-needed contact first approach. The more they get on base, the better this offense can be.

Go after Blake Snell: This kind of ties into what I talked about in point No. 1, but the Cubs need to start pitching. They need left-handed starting pitching. With Mike Minor off the market, JA Happ is perhaps the most prominent name left, and I don't see the Cubs spending a ton on getting an aging injury-prone lefty. That leaves the trade market as the Cubs best option.

What better way to use that market than by going after Ian Snell from Tampa. The Rays' ace has been put on the trade block and is the perfect candidate for the Cubs. Not only is he young at just 28 years old, but he has three years left of team control. That would give the Cubs Hendricks, Snell, and Darvish for the next three years at the top of the staff.

What would it take to get Snell, you may ask? Well, there are two things the Rays are looking for. The first thing is an MLB caliber catcher, and the second thing is infield depth. The Cubs have both, and it all starts with Willson Contreras. As much as fans love Contreras, the reality is, the Cubs would benefit by moving him now. He would generate the most significant return of any of the core players, and with Miguel Amaya ticketed for AAA this season, Victor Caratini could hold down the fort.

Infield depth is another thing the Cubs have in their favor. With Javy Baez and Nico Hoerner in the bigs, I look for the Rays to go after some of the team's prospects. Chase Strumpf, Christopher Morel, Rafael Morel, to name a few, are excellent options for teams. If anyone has the power to trade for Snell, the Cubs could be one of those teams.