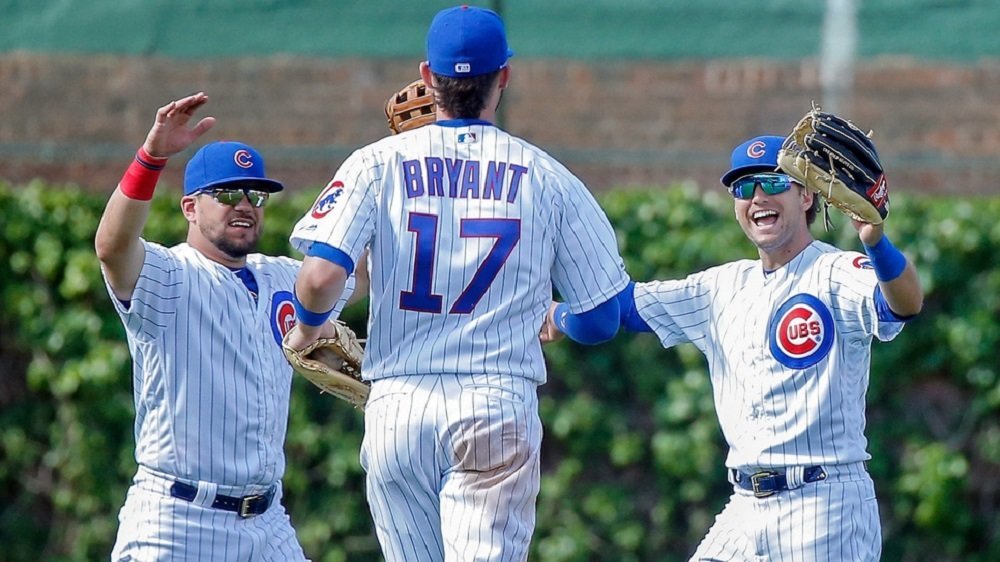 Getting closer: Although the first Spring Training game isn’t for another 2-1/2 weeks, the Cubs’ pitchers and catchers are getting ready to start relocating to Mesa. Baseball is almost here again.

The Cubs equipment truck left Chicago yesterday for the trip to Arizona.

New names: As we prepare for the start of Spring Training, get ready to learn a whole lot of new faces. The moves this winter may have seemed minimal, cheap, and safe, but they have added a bunch.

The Cubs are also expected to have several non-roster invitees but have yet to release the list.

Honoring Rizz: Yesterday, Anthony Rizzo was honored by Marjorie Stoneman Douglas High School – his alma mater. The school has announced that it will rename the ball field in Rizzo’s honor.

Proud of where I came from and honored to be a part of the new lights at MSD. Shout out to my brother Johnny who played a huge part in making this happen and everyone else who worked tirelessly to make this dream a reality. Go get 'em Eagles!

Class act: Talk about a class act. New Cubs’ pitcher Casey Sadler is leaving Los Angeles for Mesa, hoping to be en route to Chicago from there. On his way out of town, he elected to share one more moment with the Dodgers’ fans.

During my time with the @dodgers I may or may not have been known for my love of #InNout ??! To honor that & thank my fans, I’ll be buying lunch for the next 10 people who come eat lunch at the Burbank location on 1st St with us. ?? I’ll be here for the next 30 min!

Coincidence? I find it very odd that for the last four months (longer really), we’ve heard rumors and speculation about Kris Bryant being traded this winter, but now, there’s not been a peep for a few days. With the grievance settled, Bryant is now tradeable, yet all of the teams who had interest have now fallen silent publicly – despite still needing a third baseman.

Guys like Jesse Rogers and Ken Rosenthal usually have a pretty good nose for sniffing out things that are going on, yet each has been mum. The Braves, Nationals, Dodgers, Rangers, and Rockies (presuming they trade Arenado) are all still looking, yet there’s not ben so much as a peep from any of them over the last four or five days.

Is everyone now resolved to go forward with what they currently have? I find that hard to believe, especially considering the situation with Arenado and the Rockies. Equally as staled, were rumors coming fast and furious about the Padres and Red Sox working out a deal for Mookie Betts. Just a week ago, sources were reporting an Arenado trade as “inevitable,” sparking fantasy-like rumors of a one-for-one Bryant for Arenado swap. I never really bought into it, although it would undoubtedly beat trading for prospects.

If the Cubs are continuing talks with teams about KB, Theo and his counterparts are remaining extremely tight-lipped, with the same holding true for the Rockies regarding Arenado.

Jon Jay: Former Cub Jon Jay has latched on with Arizona. Jay agreed to a minor league deal with the D-Backs yesterday.

Guns N Roses: Rockers Gun N Roses will be among the concerts held at Wrigley Field this summer. The Concert will be held Sunday, July 26th, with tickets going on sale this Friday (February 7th). The band will play hits including "Welcome to the Jungle," "Paradise City," "Sweet Child o' Mine" and "November Rain."

Baseball Quotes: “Life is like a throw to first. Aim high.” -Kevin Youkilis

Phillies: The Phils have signed infielder Logan Forsythe to a minor league deal.

Yankees: The Yanks have signed righties Dan Otero and David Hale. Both will get non-roster invites to spring training.

Astros: Houston has announced that they have hired James Click to serve as their new GM in the wake of the Lunhow firing, following the sign-stealing scandal.