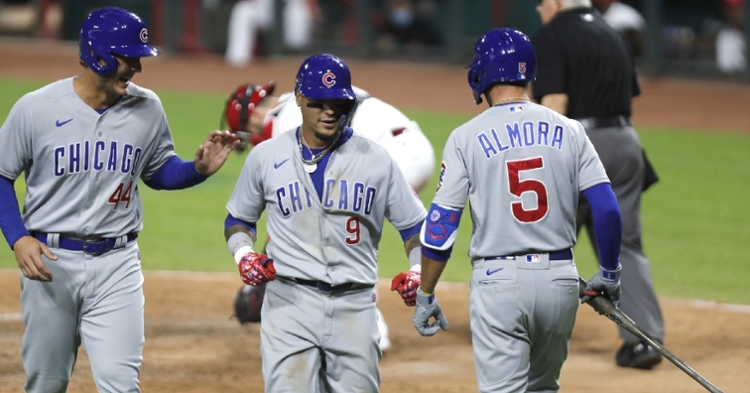 This is a four-game set, so the finale will be tomorrow with a 5:10 PM Central start time. Slated for that one are Yu Darvish and Luis Castillo (RHP) for Cincy. Everyone’s had a solid start, but Yu, but don’t fret, he’ll get it locked in.

Fly the W…twice: Since I’ve been down, the Cubbies have managed to take not one, but two from the always problematic Reds. Last night, they won 8-5 on a great outing by Alec Mills; on Monday, they took the Big Red Machine by a final of 8-7, behind a refreshingly solid start by Jon Lester.

You say you want some highlights? I’ve got you covered.

On Monday, the Cubs bullpen just about gave it away, as they ponied up seven unanswered runs throughout three innings, squandering the 6-0 lead the Cubs had given Lester.

A little drama and a big W.

Oh, by the way, Big Jon had himself a no-hitter after five innings of work.

Last night, the bullpen did a little better, allowing the Cubs to hold their lead.

Bryant injured: Kris Bryant is now dealing with left elbow issues and was sidelined for last night’s game. Bryant is getting treatment from the medical staff and considered day to day for an unspecified amount of time. Well, so much for that 1 for 17 leadoff man who’s currently sporting a .059 batting average and a .158 OBP.

This is David Ross’ chance to remove Bryant from the leadoff spot quietly. This project has been a disaster since Day-1, yet the Cubs have managed to win despite it.

Could Foltynewicz help? Very surprisingly, and even more abruptly, the Braves DFA’d Mike Foltynewicz just minutes after he was pulled Monday night after a bad start. Foltynewicz gave up four earned runs on four hits and as many walks in only 3.1 innings. The Braves ended up falling to the Rays by a final of 14-5 that night.

Foltynewicz may just need a change of scenery. He had an excellent second-half last season, he’s young, still in his arbitration years and controllable through the end of next season.

Would I put in him in the rotation? Not unless I had to, but he’d be in the bullpen, hopefully shoring up what’s become a complete debacle. With plenty of starting experience, Folty could act as a swingman, but he’d definitely be a top reliever candidate, as nothing coming out of the pen seems to be working lately.

Folty’s no stranger to Chicago, as he grew up about 90-minutes west in Sterling, IL. Hire the hometown boy seemed to be the rationale for taking on Jason Kipnis, so the Cubs may as well get Foltynewicz a shot as well. I’ve read two articles in the last 12 hours about how he could benefit both Philly and the White Sox, so I may as well plead the case for the Cubs to latch onto him.

Baseball Quotes: “There are three types of baseball players: Those who make it happen, those who watch it happen and those who wonder what happens.” – Tommy Lasorda

A home opener is always exciting, no matter if it’s home or on the road. -Yogi Berra pic.twitter.com/uEBqWKvLoV

Dodger and Astros clash: LA fans(and apparently players) are still bitter over the 2017 WS loss to Houston – especially now that the cheating has been unmasked. Joe Kelly had his way with the Astros last night, doing a little taunting of his own after striking out Correa.

The benches cleared after Kelly yelled, “Nice swing, B***h!” No punches were thrown, but after Kelly spent the night throwing at Astros’ batters, fines and maybe a suspension may be coming.

Looks like the first attempt at retaliation to the Astros pic.twitter.com/aDYMGCmIKz

Dusty Baker said after Carlos Correa struck out, Joe Kelly said, "Nice, swing, bitch." Dusty: "What upset me was the umpires warned us. Why don't you warn him? He's the one throwing the ball. He's the one that started this mess in the first place. I didn't like it at all." pic.twitter.com/DOtaiYPVYT

Cards in trouble: The Cardinals have lost star-pitcher Miles Mikolas for the season due to an elbow issue. He’ll be undergoing surgery, as per team Executive, John Mozeliak.