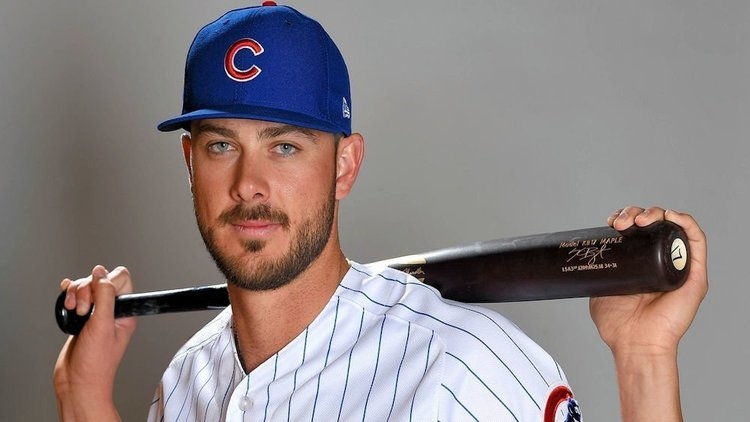 Bryant in camp: Kris Bryant showed up in Mesa today and stole the show. As predicted, the press was waiting.

David Ross had this to say about his arrival.

"When you see the All-Stars walk in the room, especially when they're like 6-6 with beautiful blue eyes, it makes you smile. And the great haircut that he has. I was telling him, too, he's got a tan this year."

On his service time grievance: “I definitely felt that responsibility to take it on,” he said. “I want to be the guy to fight for this because I feel it’s right, and it’s going to help us in two years [during CBA talks]. But I always knew it was an uphill battle. No, I didn’t flip any tables or anything like that. It was very respectful from the get-go.”

#BestthingIsawtoday was KB walking into Rossy’s office with a HUGE smile! Ready to go to work!! @Cubs

On trade rumors: “I guess I would like to be in the loop a little bit,” Bryant said. “Obviously, they don’t have to keep me in the loop by any means, you know? But I feel like I’ve earned a little respect here, in just how I go about my business and just who I am as a player and a person, too, to kind of sit down and have talks like that."

Bryant squashed false offseason rumors of him not wanting to be in Chicago. pic.twitter.com/qZwVmR6oT9

"The biggest thing with the trade rumors that have disappointed me is I feel like people, not everybody, but the main reasoning behind it is: Let’s get rid of him now because he doesn’t want to be here in two years. He turned down this monster extension ’well north of $200MM.’ And I’m like, ’Where was that? I never saw that.’ It’s just these rumors and sources and people just saying things. The only thing that matters is what comes from my mouth. Never once have I said I never wanted to play here. I’m pretty sure you guys can go through all the recordings, all the interviews. I’ve always said I respect everyone in this organization, everyone in this city, the fans. We have it so good here. Of course, I would love to play here.”

Warm it up, Kris. ?? pic.twitter.com/hk5zXkVfuE

KB also had some things to say about the Astros and their apology tour. Calling it worse than steroids and by no means limited to Houston’s 2017 campaign.

Bryant said he took guitar lessons this winter, and music is the path he’d like his kids to follow, “I've always told [my wife] my kid's not gonna play baseball, but he's gonna be a rock star. I'm gonna put a guitar in his hand, and he's gonna take singing classes, piano -- whatever it is." He then added that his dad would probably hand the kid a bat, and he’d forget all about music.

Ross on infield drills: "I've got no ego here. I don't mind being the bucket boy. That's all right. I'm about W's. I don't care. If somebody needs balls fed to him, I'll do that, too. Somebody needs me to put a ball on the tee, and I can handle that as well."

Baseball Quotes: “Knowing the strike zone is very important, but I think the first thing is knowing yourself, knowing what things you do well.” -Tony Gwynn

Astros fire back: Carlos Correa defends the 2017 World Series. While Correa makes what may be some valid points, it’s hard to admit to cheating, then expect the benefit of the doubt when you don’t. #HorseApples

Astros’ manager Dusty Baker says that he wants to put an end to what he calls “premeditated retaliation” against his team, begging MLB to intervene.

Astros will still know what pitch is coming in 2020. The Inside Fastball.

Phillies-Dodgers: The Phillies have acquired OF Kyle Garlick from the Dodgers for LHP Tyler Gilbert; next designating OF Nick Martini for assignment.