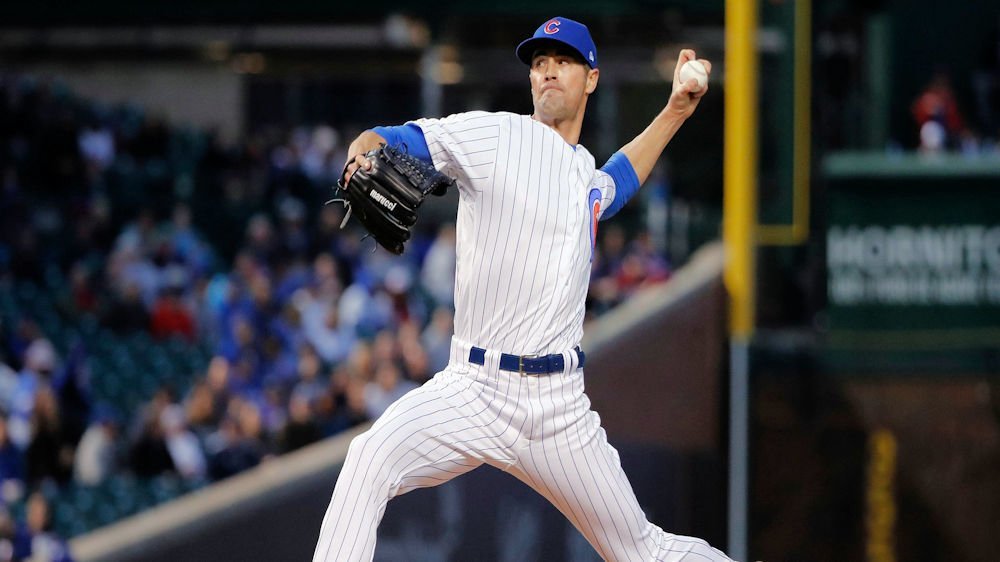 Hamels gets no offer: Cole Hamels was eligible to receive a qualifying offer from the Cubs, but he won’t be getting one. I said in a recent article that this was a bit of a conundrum for Theo, as the QO had to be made for the Cubs to receive draft pick compensation, but if Hamels accepted (which he likely would do), the Cubs would have been on the hook for nearly $18M this year for him – something they simply can’t afford. Fangraphs is predicting Hamels to earn a two-year/$28M deal, considerably less than the QO.

Graveman released: Much to my surprise, the cubs have announced that they will not be exercising their $5M club option on RHP Kendall Graveman. The 28-year-old righty was paid by the Cubs to rehab last season, after undergoing Tommy John surgery. Graveman was expected to compete with Alec Mills, Tyler Chatwood, and others for the #5 spot in the cubs’ rotation.

While Graveman joins the free-agent poolnow, the possibility still exists that the Cubs try to re-sign him to a different type of contract. Chicago will be looking for depth behind its MLB rotation.

Phelps released: The Cubs have also announced that they will not be picking up the $5M option on righty-reliever David Phelps, making him a free agent as well.

Phelps option was only $3M but increased to $5M once he hit 40 appearances. This was the last option decision the Cubs had to make.

Quick recap: Anthony Rizzo and Jose Quintana options were picked up, and the options belonging to Derek Holland, David Phelps, Kendall Graveman, and Tony Barnette were declined. Barnette will remain on the restricted list after leaving Iowa, following his temper tantrum over not being promoted.

Also this week: Kris Bryant's grievance hearing resumed. So will still be a bit before we get that decision.

Cubs lose personnel: According to reports, perhaps having to do with Tim Buss (who recently left the Cubs to join Maddon and the Angels), assistant athletic trainer Matt Johnson, massage therapist Laura Paluch and yoga instructor Christine Schwan won't return for the 2020 season; Johnson had been with the Cubs since 2000. All three were a part of the Cubs' traveling party and played vital roles in the players' daily preparation. Stay tuned; more changes are coming soon.

Colin Rea: As expected, the cubs have RHP Colin Rea to the 40-man roster.

Webster out: The Cubs have outrighted Alan Webster to AAA Iowa. The 40-man now stands at 32.

Carl Edwards Jr.: Edwards kind of fell off the rails this year and things keep getting worse. After being outrighted, Edwards has now cleared waivers and accepted free agency.

Baseball Quotes: “Baseball is littered with obstacles. You have to learn how to overcome them to be successful.” -Dave Winfield

Sports should be about kids and their passion, not about parents and their goals. -Mike Matheny pic.twitter.com/Y31wLMLzGc

Brewers: Rather than accepting an outright assignment, 1B/OF Tyler Austin has elected free agency. The Crew has also declined the $7.5M option on 1B/OF Eric Thames while picking up the option on catcher, Manny Pina. Milwaukee has also reinstated RHP Bobby Wahl and RHP Corey Knebel from the 60-Day IL.

Speculation is that the Brewers are shaving money in an attempt to land one of the big-name free agents (Hey, Theo… pay attention, please.) Rumor also has it that they’d bring back Thames if he agrees to less than the $7.5M that he should have made – sounds a little shady, but this is baseball…

“Not my president:”: Anthony Rendon, Javy Guerra, Joe Ross, Wander Suero, Wilmer Difo, Michael A. Taylor, Victor Robles, and Sean Doolittle are not on the official attendance list for today’s ceremony at the White House.

Kurt Suzuki donned a MAGA hat on the Nats’ visit to the White House. Trump gave him a hug.

Oh well, at least there is this: Hot Stove is officially underway. (I know, it started the day the season ended, but when free agency starts, it’s like the oven has finally reached temperature.)

Free agency officially begins in less than two and a half hours. @keithlaw ranked the top 50 free agents available. You should read it: https://t.co/5yTQK34BKw ($)

Qualifying Offers: Only ten players received a $17.8M qualifying offer this year. Players issued the offer will have ten days to assess their options. Should a player reject the offer and fail to work out a deal with their existing team, he will enter the market carrying the requirement that a signing team sacrifices draft compensation.

Astros: The Astros announced today that they had selected the contract of lefty Kent Emanuel. That move will prevent him from reaching a minor-league free agency. The Houston organization also declined a $2.825M club option over righty Chris Devenski.

Braves: Atlanta has reached a new deal with catcher, Tyler Flowers. This is weird: The Braves have agreed to re-sign Flowers after paying a $2MM buyout on his $6MM club option. Declining Flowers’ option was a purely on-paper move, as he’ll be brought back on a $4MM deal for the upcoming season. The Braves have also made a similarly structured deal to keep Nick Markakis for another year.

By declining the option on Markakis for $2M rather than trigger it at $6M, then paying him $4M for 2020 he still receives the $6M. The braves just move one-third the money to 2019.

Atlanta has also declined the options on righty Julio Teheran and center fielder Billy Hamilton and has made a qualifying offer to third baseman Josh Donaldson.

Mets: New York says that it intends to make a qualifying offer ($17.8M) to RHP Zack Wheeler. Wheeler won’t accept the offer, but NY made it so that they didn’t lose a draft pick.

Red Sox: The big news for Boston fans is that JD Martinez will not opt-out of his remaining deal. By remaining with the Red Sox, Martinez can earn $62.5M over the next three years. He also has an opt-out clause after the 2020 season. Boston has also outrighted catcher Juan Centeno; he has elected free agency.

A’s: Oakland has claimed lefty TJ McFarland off of waivers from Arizona.

Angels: The Halos have declined the option on OF Kole Calhoun.

Yankees: As the clock winds down, it appears as though the Yanks are going to withhold a qualifying offer for Didi Gregorious.