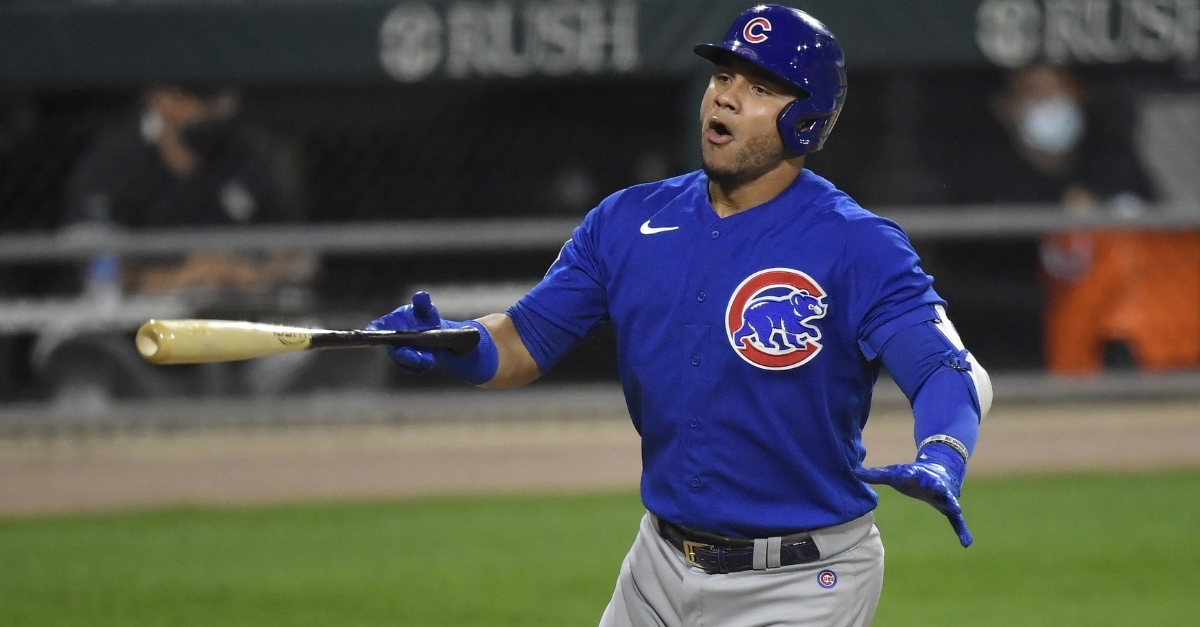 CHICAGO — Entering Friday's crosstown matchup between the Chicago Cubs (33-25) and the Chicago White Sox (34-24), both teams were slumping, with the North Siders having lost three in a row, as well as five out of their last six, and the South Siders having lost five in a row and fallen into second place in the American League Central. The series opener at Guaranteed Rate Field saw one of the two Windy City teams emphatically escape its rut, while the other sunk deeper into a quagmire.

Romping the White Sox 10-0, the Cubs hit five home runs on the night, including two by Willson Contreras, and benefited from ace Yu Darvish throwing a seven-inning gem on the mound. The highlight of the rout was Contreras, who was the Cubs' designated hitter, flipping his bat high into the air after going deep in the third inning. "The bat flip heard round the world" culminated in some bad blood spilling over into the later innings, with a hit by pitch of Contreras resulting in multiple White Sox ejections. Prior to the slugfest, the Cubs had not homered multiple times in a game since Sept. 12, and Cubs' lopsided beatdown of their intercity rivals resulted in the White Sox suffering just their second shutout loss of the season.

T1: Dylan Cease unintentionally hit Anthony Rizzo with a pitch but then forced Contreras to ground into an inning-ending 4-6-3 double play.

B1: Darvish's excellent outing came in his final bid for the National League Cy Young Award. Striking out five and getting taken for just three hits and one walk in seven scoreless frames, Darvish put a bow on a phenomenal regular season for the right-hander. Tim Anderson hit a leadoff base knock off Darvish in the bottom of the first, though, but the White Sox failed to convert it into runs.

T2: Interestingly, four of the Cubs' five dingers were of the opposite-field variety, beginning with a two-out solo bomb off the bat of Kyle Schwarber that carried out to left.

B2: The White Sox went down in order their second time up.

T3: Cease walked Nico Hoerner and gave up a single to Ian Happ, setting the stage for Contreras to club a towering three-run bomb to right. Contreras' demonstrative bat toss probably boasted just as steep of a launch angle as the rainmaker, and it likely did not sit well with the struggling White Sox.

It's opposite field day. pic.twitter.com/ecJN6PjJDv

Where you’re going, @WContreras40, you don’t need a bat. pic.twitter.com/SqLAFY5l30

"May your bats fly as high as your dreams.
- Michael Scott"
- @Cubs pic.twitter.com/C76Mqs8yQr

B3: Adam Engel's leadoff double in the bottom of the third was squandered.

T4: Javier Baez got in on the homer-hitting action with a leadoff 428-foot moonshot that sailed out to left-center, marking the only Cubs home run that did not travel to the opposite field. Anderson, who manned shortstop, robbed Victor Caratini of a hit by making a great snag of a hard-hit liner off Caratini's bat. Caratini went on to enact revenge at the dish later in the contest.

Real nice out of TA7 pic.twitter.com/9YRufNkUur

B4: Yasmani Grandal drew a leadoff walk but was left stranded.

T5: After singling with two outs, Rizzo collected his third steal of the season. Contreras was then walked, and Gio Gonzalez relieved Cease. A passed ball suffered by Grandal as Jason Heyward whiffed at strike three enabled Heyward to reach first safely and the aforementioned runners to move up a base. However, Baez grounded out to neutralize the bases-loaded scoring threat.

B5: Yet again, the South Siders failed to take advantage of the leadoff man reaching base, as Luis Robert's leadoff single paid no dividends.

T6: A clumsy leadoff single by Kyle Schwarber resulted in Billy Hamilton pinch running for him. Schwarber hustled to the bag after hitting a grounder toward first, but he slid in feet-first and awkwardly stumbled off the base after being ruled safe. Thankfully, Schwarber appeared to be just fine in the dugout after being pinch run for. As previously mentioned, Caratini avenged himself by hammering his first round-tripper of the year. With the switch hitter batting from the right side of the plate, Caratini took Gonzalez deep on a pitch that rocketed into the Cubs' bullpen beyond right field. The two-run shot led to a hilarious scene involving Cubs closer Jeremy Jeffress playfully taunting White Sox right fielder — and Jeffress' former teammate — Nomar Mazara.

B6: Darvish breezed through a 1-2-3 sixth, using just eight pitches in the process.

T7: Jimmy Cordero took the mound at the beginning of the seventh, and, following a Rizzo groundout, drama ensued with Contreras in the batter's box. The second pitch of Contreras' plate appearance was a sinker that plunked Contreras in the back. The umpires convened and decided to eject Cordero, as the hit by pitch was seemingly intentional, and White Sox manager Rick Renteria, who formerly managed the Cubs, went ballistic. Renteria was ejected after storming out of the dugout and giving the umpires a piece of his mind, and White Sox pitching coach Don Cooper was ejected for throwing a bottle onto the field in disgust.

The three ejections culminated in Jace Fry emerging from the bullpen to pitch. He forced Heyward to fly out but proceeded to commit an egregious throwing error after fielding a tapper hit by Baez. Fry's errant throw to first allowed Contreras to score. After Contreras crossed the plate, Baez was tagged out in a rundown between first and second.

B7: In Darvish's final inning of work, the White Sox went three up, three down.

T8: Fry walked Caratini and Jason Kipnis in back-to-back plate appearances, and an infield single by Hoerner loaded the bases with one away. Then, Grandal committed another mistake by failing to corral an on-the-mark throw from center field that was made possible by a Happ flyout. As a result, Caratini scored, and the other baserunners advanced. Fresh off being called up earlier in the day, Patrick Wisdom pinch hit in place of Rizzo and flied out in his first at-bat as a North Sider.

B8: Dan Winkler tossed a scoreless eighth, which was composed of two infield popouts and one swinging strikeout. Wisdom took over for Rizzo at first base in the half-inning and also served as the first baseman in the bottom of the ninth.

T9: The White Sox resorted to having second baseman Yolmer Sanchez toe the rubber in the top of the ninth. Contreras lined his second home run of the evening off him but did not celebrate with a bat flip after taking the position player deep. The leadoff homer carried out to right in a hurry. A few at-bats later, Baez tried his luck at batting left-handed for the second time in his career. The first time he did so, which occurred in 2019, resulted in a flyout, but "El Mago" had better luck against Sanchez. Smacking a gapper that rolled to the wall in right-center, Baez, who is a natural lefty, recorded a double for the first hit of his career from the left side of the plate. He was not as lucky thereafter, however, as he headed for third and then home as Hamilton popped up onto the infield, resulting in Baez being doubled off at second.

B9: Andrew Chafin finished off the shutout by pitching a 1-2-3 final frame. Darvish, whose ERA ended up at 2.01, earned his National League-leading eighth win, moving him to 8-3 overall. As for Cease, he was handed the loss, dropping him to 5-4 overall. Through four games, the 2020 Crosstown Classic is tied 2-2. The Cubs' magic number to clinch the National League Central now stands at one.

.@faridyu finishes the regular season with a 2.01 ERA and leads the NL with 8 wins! pic.twitter.com/3w6q2tVnHk

Up Next: With a chance to win their division, the Cubs will face off against the White Sox in the second installment of the three-game series, starting at 6:10 p.m. CDT on Saturday, Sept. 26. On what is expected to be a windy, partly cloudy evening in Chicago, the Cubs' Jon Lester (3-2, 4.40) and the White Sox' Dane Dunning (2-0, 3.19) will start on the mound in a lefty versus righty matchup.