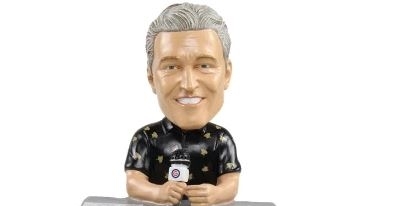 MILWAUKEE, Wi., November 1, 2019 – This morning, the National Bobblehead Hall of Fame and Museum unveiled a third and final version of the officially licensed, limited edition bobblehead featuring Pat Hughes, which plays his historic radio call of the final out in Game 7 of the 2016 World Series. The bobblehead features the Cubs broadcaster at an announcer’s desk holding a microphone. With the push of a button, the bobblehead plays Pat’s legendary call from the historic November evening in Cleveland when the Cubs became World Series Champions for the first time in 108 years.

The bobbleheads, which are individually numbered to 11,216 to signify the November 2, 2016 date of Game 7 of the 2106 World Series. The first production run of the bobbleheads just arrived and are $40 each with shipping being a flat rate of $8 per order. The bobbleheads were produced exclusively for the National Bobblehead Hall of Fame and Museum and Pat Hughes by FOCO.

Pat Hughes has been the radio play-by-play voice of the Chicago Cubs since 1996 and his voice has become one that Cubs fans across the country love to hear each season. The 2019 season marked the 37th consecutive year that Hughes served as an MLB announcer. In November 1995, Hughes was selected by WGN Radio to be the new “Voice of the Cubs” and he partnered with color commentator and Hall of Famer, Ron Santo, from 1996 to 2010 for what became known as the “Pat and Ron Show”. Pat has the distinction of being the first Cubs announcer to call a Cubs World Series championship since radio and TV weren’t invented when the Cubs had last won a World Series in 1908. Pat’s legendary call was heard and replayed by millions of Cubs fans listening to his broadcast on WSCR The Score late into the night of November 2nd and the morning of November 3rd for those on the east coast.

Pat’s legendary call of the final out plays at the push of a button, “A little bouncer slowly toward Bryant. He will glove it and throw to Rizzo. It's in time! And the Chicago Cubs win the World Series! The Cubs come pouring out of the dugout, jumping up and down like a bunch of delirious 10-year-olds. The Cubs have done it!”

Baseball historians and experts widely agree that Game 7 was one of the greatest, most dramatic games ever played. Shortly after Rajai Davis’ dramatic home run in the bottom of the 8th tied the game at 6-6, a sudden storm came over Progressive Field as the game was headed to the 10th inning. The 17-minute rain delay gave the Cubs a chance to regroup, with Cubs right fielder Jason Heyward giving the team a motivational message that fired the Cubs up. Ben Zobrist’s go-ahead double moments after the rain delay ended gave the Cubs the lead, and Miguel Montero’s single provided a crucial insurance run, as the Indians scored off another hit by Davis in the bottom of the 10th. Cubs pitcher Mike Montgomery entered the game for what would be his first career save as the Indians’ Michael Martinez hit a slow grounder to Bryant who threw to Rizzo for the final out to clinch the Cubs first championship since 1908.

"When we saw a picture of Pat from Game 7, we thought a bobblehead featuring the actual shirt would be a fitting final version of this special bobblehead,” said Phil Sklar, Co-Founder and CEO of the National Bobblehead Hall of Fame and Museum. “With the previous versions of Pat’s bobbleheads nearly sold out, this will give Cubs fans a final chance to have this special bobblehead that will become a cherished keepsake that will be passed down from generation to generation.”