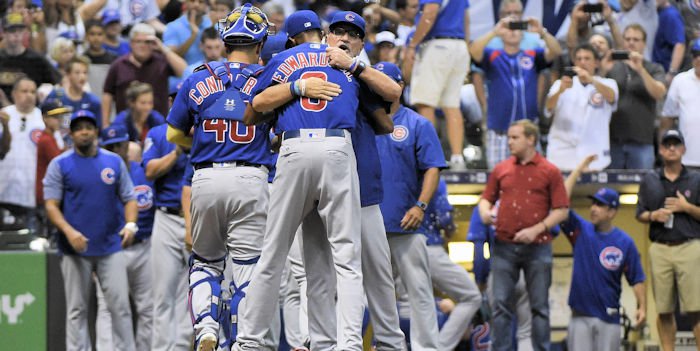 The Angels announced on Wednesday morning that former Cubs manager Joe Maddon has been hired to manage their ballclub on a new three-year contract worth $12 million.

Best of luck to Maddon with the Angels and on behalf of all Cubs fans, thanks for your help in breaking the title curse in 2016!

Cubs Twitter and the entire sports world seemed to be discussing the new hire.

Going back to where it all started! Excited for the next chapter!! pic.twitter.com/DT2W3tYAUP

Time for a shameless plug. Book I co-authored on Maddon covers his time w the Angels organization. Passed over for ML coaching jobs and manager. Now going back there. Its a HUGE deal for him. Try Not To Suck available at Amazon and book stores!

Good for Joe, good for the Angels. Hope to see them meet the Cubs in the 2020 World Series. That'd be fun. https://t.co/ged30LBUTo

Joe Maddon is the #Angels new manager. In ‘02, Maddon’s father passed away so he carried his fathers Angels hat with him in his bag. They won the ‘02 WS.

During game 7 of the 2016 WS with the #Cubs, Maddon brought his dads Angels hat w/ him during extra innings. They won the WS. pic.twitter.com/WMLXVbr1qg

Forever a staple in Chicago. Good luck with the Angels, Joe. ???? pic.twitter.com/WmNTkDo8BU

Happy for @CubsJoeMadd, who is returning to his original baseball home to manage the @Angels. LA got themselves a Hall of Fame manager and a Hall of Fame human being. Joe will always have a special place in the hearts of @Cubs fans.https://t.co/eF67U1N13c

He returns to the organization after spending his first 31 seasons with the club. pic.twitter.com/35KK1E6mqe

Super move by @Angels JOE MADDON a quality chioice & the ?@Mets? would be smart to hire a WINNER in JOE GIRARDI Now! https://t.co/iWyAjhXZgJ

The @Angels have come to terms with Joe Maddon to be the team's next manager. pic.twitter.com/mVe4bvyXSy

The last time Joe Maddon managed the Angels, they had Tim Salmon.

Los Angeles Angels hire Joe Maddon to 3-yr deal worth $12-15M. Maddon spent his first 31 years in professional baseball with the Angels, was bench coach from 2000-05.

Joe Maddon to the Angels?