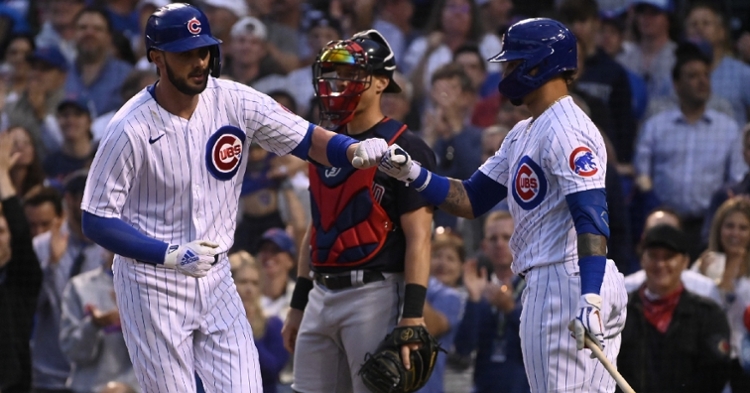 CHICAGO — Breaking out of an offensive lull, the Chicago Cubs (41-33) scored more than three runs for the first time in 10 games and prevented the Cleveland Indians (40-31) from pulling off a season series sweep. The Cubs closed out the two-game set at Wrigley Field with their first win in four tries against the Tribe this season. The North siders powered out three home runs, scored four runs in the sixth inning and earned a 7-1 victory prior to embarking on a 10-game road trip.

Having won seven straight starts, Kyle Hendricks entered the contest on a hot streak and proceeded to pitch six scoreless innings, in which he struck out five, and make it eight straight winning decisions. Eli Morgan started on the mound for the Indians and was fairly dominant before coming unglued in the aforementioned four-run sixth inning.

Patrick Wisdom was shaken up in his second-inning plate appearance, tweaking his knee and hobbling around in pain before resuming the at-bat, which resulted in a lineout. Ryan Lavarnway led off the third with a double, but Hendricks worked around it. Jason Heyward helped Hendricks' cause with a sliding grab in right field, which robbed Bradley Zimmer of a hit and marked the first out of the inning. Hendricks nearly snagged a comebacker hit by Eddie Rosario in the fourth, but it caromed off his glove and resulted in an infield single. Rosario was left stranded, though.

If I had to guess, this is why Patrick Wisdom is getting his knee/leg checked out by the trainer. pic.twitter.com/18y9aq1sxM

Snapping a 21-inning stretch in which the Cubs failed to homer, Kris Bryant drilled a go-ahead solo dinger out to center field in the bottom of the fourth. Bryant's long ball marked the lone blemish of Morgan's outing until the sixth, when Sergio Alcantara sparked the Cubs with a leadoff double. Rafael Ortega then pinch hit for Hendricks and advanced Alcantara to third with a base hit. Joc Pederson then plated both runners via a double, which chased Morgan from the game.

Nick Sandlin entered to pitch and walked Kris Bryant. Next, Javy Baez smacked a ground rule double down the left field line, with the ball bouncing into the stands and touching a fan. Pederson scored as a result, and Bryant headed to third. Willson Contreras plated the final run of the inning with a base knock that scored Bryant and advanced Baez to third. Contreras made it to second on the throw from the outfield. Wisdom and Jake Marisnick then struck out, and, following a pitching change, Jason Heyward flied out.

Andrew Chafin needed just seven pitches to retire the seventh-inning side in order. He also scurried over to first to cover the bag on a groundout, using fancy footwork to step on the base and record the out. With Ryan Tepera pitching, Zimmer began the eight with a bunt single. The Indians loaded the bases with no outs in the penultimate inning but managed to score only run off Tepera, which came on an RBI fielder's choice that Amed Rosario grounded into, thus scoring Zimmer.

Contreras and Wisdom skied back-to-back solo jacks off Trevor Stephan with two outs in the eighth. The 400-footer from Contreras landed in the basket atop the wall in center, and Wisdom's round-tripper was smashed 423 feet out to center, clearly indicating that Wisdom was no longer hampered by the knee ailment. Daniel Winkler finished the 7-1 victory off with a 1-2-3 ninth, and the Cubs won by more than two runs for the first time in 10 outings.