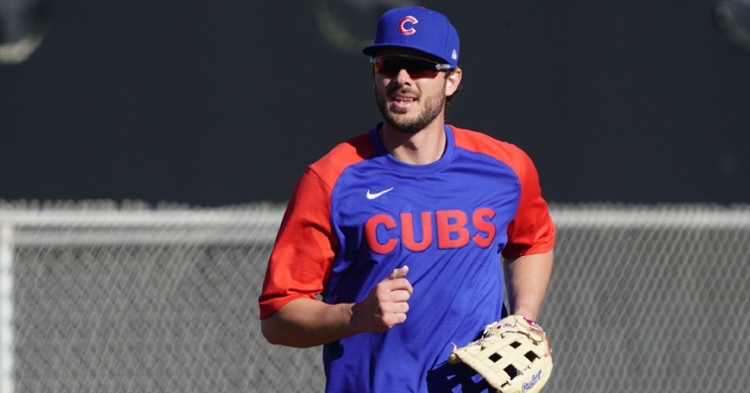 Hello, Cubs fans out there! I hope everyone is having a great Friday and ready for the upcoming baseball season.

Check out the latest news, photos, and tidbits from spring training with the Cubbies with our latest edition of Cubs News and Notes.

We will try to have this feature several times a week, so everyone gets a summary of what is happening regularly at Cubs camp.

Let's get right all the Cubs notes!

To nobody's surprise, Cubs veteran ace Kyle Hendricks will get the first Cactus League start and likely first start of the regular season.

Kyle Hendricks will get the first Cactus League start for the #Cubs, Tommy Hottovy says. He’ll be lined up for “the start of the season.” (Y’all know what that means lol)

The Cubs took a bunch more pictures for social media and to use all season for their coverage of the ballclub:

Behind the Scenes at Photo Day!

Some photos of KB, Rizzo, J-Hey, and Willy during the photoshoot:

Rizzo getting some bunt work in during batting practice:

Listen to the crack of the bat as Kris Bryant smacked a homer off of veteran Jake Arrieta during live workouts on Thurday afternoon:

Javy Baez got some work in batting against Arrieta:

Rizzo also got some action against Arrieta:

For the “Why can’t you hit that?” crowd.

Cubs pitching coach Tommy Hottovy explains why a six-man rotation is not a great idea to begin a season and actually taxes the bullpen that needs that extra bullpen member:

Here is @Cubs pitching coach Tommy Hottovy on the prospects of a six-man starting rotation:

J-Hey doesn't care about preseason predictions by the media according to his recent media appearance.

We miss you Mr. Cub! Check out this throwback Mic'd up featuring Cubs legend Ernie Banks at Wrigley Field:

Throwback mic'd up with Mr. Cub!

Bryant was interviewed with Marquee Sports about how Cubs manager David Ross was born to be a manager:

"I think being a manager is really what this guy was made to do."@MillerLite | https://t.co/t7BxcZw9TD pic.twitter.com/8Iua1xloSS

The Cubs have had some awesome throwback jerseys during the years. What is your favorite?

What is your favorite #Cubs throwback jersey? pic.twitter.com/9lnaNAxitS

The Cubs are celebrating Black History Month shining some light on some of the black players that paved the way in major league baseball.

Here is a video about Sam 'Toothpick' Jones:

On May 12, 1955, Sam “Toothpick” Jones became the first Black pitcher to toss a no-hitter in MLB history, striking out Dick Groat, Roberto Clemente and Frank Thomas to finish the game. #BlackHistoryMonth pic.twitter.com/PVNgMEuUm7

Cubs pitcher Alec Mills no only has a no-hitter to his record, he is a really great guy. Mills hung out with some Advocate Children's Hospital patients on Wednesday to talk to them and give them some support.

Check out a few photos:

Thank you to the @Cubs and @ATMills37 for helping us all #CubTogether, by providing our patients with some virtual one-on-one time yesterday. Our patients were thrilled about the opportunity to ask questions about baseball and Spring Training. pic.twitter.com/WjoAop5gQh