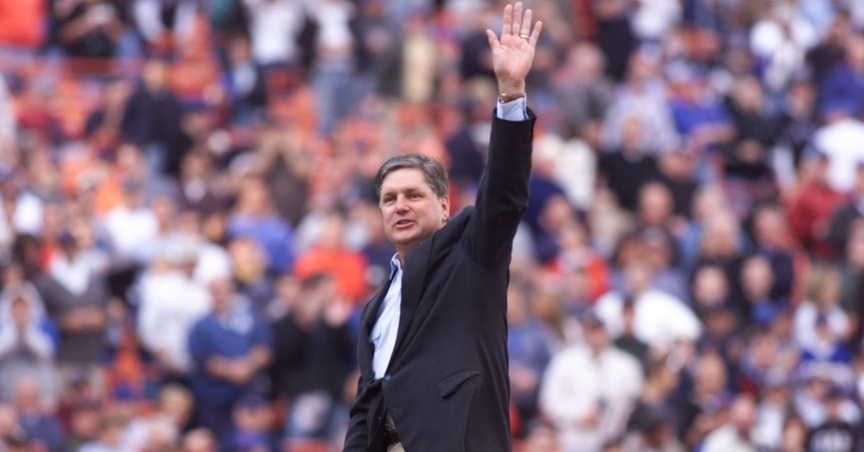 Hall of Fame pitcher and three-time CY Young Award winner Tom Seaver has passed away at the age of 75 from complications of dementia and Lyme disease.

Seaver was arguably the greatest Mets player of all-time and they released the following touching statement.

“We are devastated to learn of the passing of Mets Legend and Baseball Hall of Famer Tom Seaver,” Mets owners Fred and Jeff Wilpon said in a statement. “Tom was nicknamed “The Franchise” and “Tom Terrific” because of how valuable he truly was to our organization and our loyal fans, as his #41 was the first player number retired by the organization in 1988. He was simply the greatest Mets player of all-time and among the best to ever play the game which culminated with his near unanimous induction into the National Baseball Hall of Fame in 1992.

“Beyond the multitude of awards, records, accolades, World Series Championship, All-Star appearances, and just overall brilliance, we will always remember Tom for his passion and devotion to his family, the game of baseball, and his vineyard.”

MLB released the following statement on his passing.

“I am deeply saddened by the death of Tom Seaver, one of the greatest pitchers of all-time. Tom was a gentleman who represented the best of our National Pastime. He was synonymous with the New York Mets and their unforgettable 1969 season. After their improbable World Series Championship, Tom became a household name to baseball fans – a responsibility he carried out with distinction throughout his life.

“On behalf of Major League Baseball, I extend my condolences to Tom’s family, his admirers throughout our game, Mets fans, and the many people he touched.”

CubsHQ would like to give out our most heartfelt condolences to the friends of family of Tom Seaver.

We mourn the passing of Tom Seaver, a Hall of Fame pitcher and World Series champion. He was 75. pic.twitter.com/KcSBQTk0rL

Hall of Fame RHP Tom Seaver passes away at the age of 75.

In twenty seasons with the #Mets, #Reds, #WhiteSox, and #RedSox, Seaver won 311 games, struck out 3,640 batters, made 12 All-Star appearances, and won three NL Cy Young Awards. The Mets retired his number 41 in 1988. pic.twitter.com/vFpZfqzVqG

In memory of Tom Seaver, 1944-2010, a baseball card @Topps made and pulled at the last minute. Many players tried to fool the photographer by posing "the wrong way." I don't know of any but Seaver who tried it the first time he posed for a card. To me it defines his confidence: pic.twitter.com/XOp1zybjtK