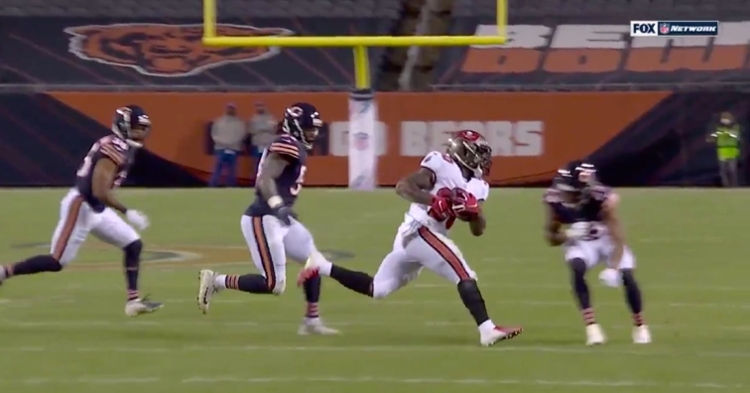 Bears cornerback Kyle Fuller forced a fumble with an epic hit on an unsuspecting Bucs running back.

CHICAGO — After struggling to score for the majority of the first half on Thursday, the Chicago Bears scored 14 points late in the second quarter and took a 14-13 lead into halftime over the Tampa Bay Buccaneers. Shortly after the Bears scored their first touchdown of Week 5, Bears cornerback Kyle Fuller forced a fumble with a huge hit at Soldier Field.

Originally ruled an incomplete pass, the play was ruled a fumble after a replay review. Fuller's bone-crushing hit on Bucs running back Ke'Shawn Vaughn jarred the football loose, leading to a clean Bears recovery. Fuller was initially flagged for the clean hit, but the penalty was waved off. Thereafter, the Bears took the lead on a touchdown pass from quarterback Nick Foles to tight end Jimmy Graham.

P??P! Fuller with the hard hit, Quinn with the scoop, you already know the rest.