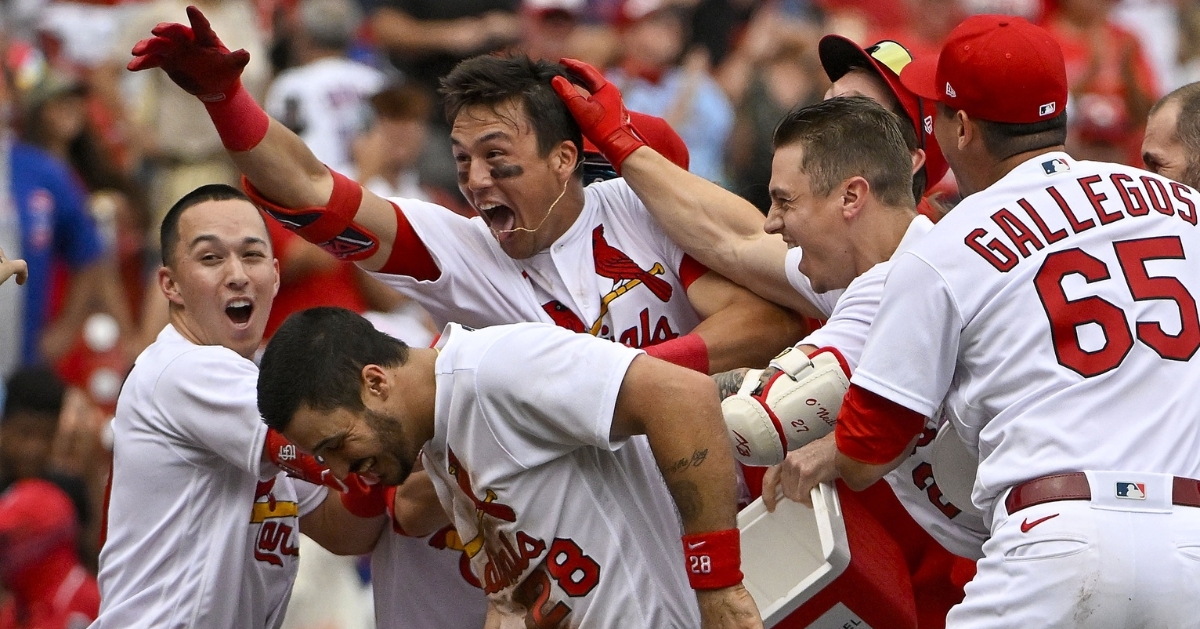 ST. LOUIS - Following a night of inclement weather that forced Wednesday's game to be postponed, the Chicago Cubs (41-62) and the St. Louis Cardinals (56-48) got together for a day-night doubleheader at Busch Stadium. Game one featured a matchup of right-handers as Marcus Stroman took on Miles Mikolas.

Early on, it was all about Stroman as the Cubs right-hander was dealing through six innings, keeping the Cardinals off the board while striking out six. That was until the sixth inning, when he allowed a pair of solo shots and three runs total as the Cardinals started to mount their comeback to bail Mikolas off the hook. That comeback was complete when Lars Nootbarr picked up the walk-off single against Erich Uelmen in the ninth inning to deliver a 4-3 win in game one.

In desperate need of a hot start, the Cubs looked to their leader Willson Contreras to provide the spark they needed. With the emotion of the trade talks no longer a topic, Contreras can finally settle in and play baseball as he took a Mikolas pitch in the first inning over the right field fence to give the Cubs a quick 1-0 lead. No one was expecting that run to hold up, but as the game went on, it started to look like that run would be just enough.

Looking for more in the third, Rafael Ortega picked up the first of his three hits as a two-run double landed him in scoring position. Ortega was stranded on the bases, but the Cubs still led at this point of the game. Through five innings, the Cubs were making that 1-0 game hold up as Stroman allowed just one hit to Brendan Donovan in the third.

In search of some insurance runs to back Stroman for the job he was doing, the Cubs offense was starting to make solid contact against Mikolas in the sixth, which was bound to come with rewards. Contreras got things started in that sixth inning with a leadoff double and immediately set the Cubs up with a runner in scoring position.

Two batters later, it was Seiya Suzuki cashing in as his single doubled the Cubs lead 2-0. Nico Hoerner followed that single up with another single, and just like that, the Cubs had runners on the corners with one down. Hoping for a big swing off the bat of Patrick Wisdom, Mikolas was able to keep the ball in the yard, but his flyball was deep enough to give the Cubs a 3-0 lead.

One inning later saw the Cubs set up with a great scoring chance again as one-out singles from David Bote and Ortega spelled the end of the road for Mikolas as the Cardinals went to their pen. Unfortunately for the Cubs, they couldn't cash in with that scoring chance, and that would come back to haunt them as the game went on.

With his shutout still intact in the seventh inning, Stroman not only lost it quick, but became unraveled in a hurry. Not only did Nolan Gorman lead things off with a homer, but Paul Goldschmidt made it back-to-back homers as the Cardinals pulled within 3-2. A hard-hit double from Arenado shortly after put another runner in scoring position, with Stroman on the verge of giving up that lead.

Stroman would bounce back with a pair of fly balls, but the one that came off the bat of Nootbaar ended up being a sacrifice fly as the Cardinals battled back to tie things up and chased Stroman after 6 2/3. That meant it was time for the Cubs to go to their pen as Brandon Hughes was the first one out of the pen for David Ross as he finished off the seventh before tossing a scoreless eighth.

Needing a run in the ninth to take the lead and potentially pick up a massive game-one win, the Cubs managed just a two-out single from Ortega off of Ryan Hasley as it was up to Uelmen to keep things tied in the bottom of the ninth. Uelmen got off to a great start by retiring the first hitter he faced, but walks to Arenado and Paul DeJong set the Cardinals up with an excellent opportunity to win.

Even with traffic on the bases, Uelmen was one groundball away from the inning coming to an end as Nootbaar stood in the batter's box. With the game-tying RBI under his belt, Nootbaar did one better as he took the 2-2 pitch from Uelmen and laced it into right field for the game-winning hit as the Cardinals walked off the Cubs 4-3 in game one.

The Cubs had nine hits in the ballgame, with Ortega leading the way with three. Contreras and Hoerner added a pair of hits, with Suzuki and Bote grabbing the remaining hits. Sean Newcomb will start game two for the Cubs tonight as he will face former Cub, Jose Quintana.

Top Marcus Stroman News
Top Chicago Sports News of the Week
Partner of ChicagoBearsHQ.com, ChicagoBullsHQ.com, CubsHQ.com, and TigerNet.com
ChicagoSportsHQ is an independent site and is not affiliated in any way with Chicago Professional Sports Teams.