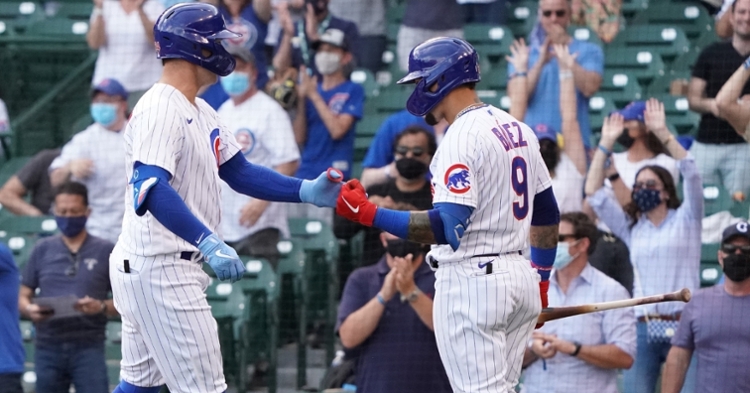 For the second time in as many games, the Chicago Cubs offense was held in check by a Brewers starting pitcher as they continue to search for signs of life. This time, Brandon Woodruff was on the hill as he held the Cubs scoreless for over six innings while having a very efficient pitch count in the process.

Fortunately, Kyle Hendricks was able to keep the Brewers bats in check himself, keeping them off the board for six innings until Lorenzo Cain took Alec Mills deep in the eight to give Milwaukee the lead. Joc Pederson tied things up in the bottom of the eighth with his first hit of the season before an extra-inning three-run shot by Cain delivered the knockout blow in the 4-2 Cubs defeat. Here are some takeaways from the game.

Excellent bounce-back performance for The Professor

Coming off a rough first start of the season which followed a rough spring, Hendricks was on the mound on Wednesday looking to get back on track. Against a Brewers team that he has had success against, Hendricks was dialed in, allowing just four hits in six innings of work while striking out six and walking one.

More importantly, he didn't allow an earned run as he kept the Cubs in the game despite the lack of offense once again. This was precisely the type of outing Hendricks needed, especially when you look at how much struggled across the board against Pittsburgh. Considering the weather was less than ideal that day, that may have played a part in his struggles, but he won't use that as an excuse.

Hendricks got back to doing what he does best on Wednesday by not only attacking hitters but working the corners and changing speeds effectively. He survived a fourth-inning leadoff double, which was about the most the Brewers could do off him and put the game in the hands of the bullpen. Hendricks looked like an ace out there today, which is a promising sign for the Cubs.

The Professor is dealing! pic.twitter.com/kvpe7Hk9Ey

Pederson is on the Board

Better late than never, right. After putting together one of the best spring training showings in team history, Pederson has gotten off to a less than ideal start with his new team. Not only was he homerless entering the game winless, but he was hitless five games into the season after lighting up the Cactus League.

That isn't to say that Pederson hasn't produced in some way. Out of all the Cubs hitters, Pederson has done the best when it comes to moving guys over giving himself up to get the job done. He also had a sacrifice fly and an RBI ground out to his credit, so he found ways to get runners home despite not hitting.

Down 1-0 in the bottom of the eighth and the Cubs looking for life, Pederson delivered in the best way possible by going yard for the first time in 2021. It not only tied the game but was a perfect exclamation point for someone who was searching for their first hit of the season. Now that the monkey is off his back let's see if that kick starts him offensively and if he can get on a nice roll over the next series or two.

The extra-inning rule stinks when you lose

I am always willing to consider rule changes in a game if it makes the sport better. For baseball, many of the new rules put in play make the sport better, but there are some I still question. I felt the universal DH made the game better, but the seven-inning doubleheaders don't do it for me. However, the rule that many hate that I still can't wrap my head around is starting a runner on second base in extra innings.

I get what MLB was trying to do when implementing this rule as they wanted to speed up the game to avoid 15 plus inning affairs. If that is what the league wanted to do, why not start the runner on first base instead. I don't see why starting someone on second base makes the game better.

As a pitcher, you are immediately put behind the eight ball as you need to prevent that runner from scoring and prevent a bigger rally from starting. As a hitter, it is all about strategy as you could give yourself up and move the runner to third or be selfish and try to play the hero.

This is a rule that will take some time to get used to, but when your team is on the losing side of things, it stinks. For the Cubs, this loss is a little easier to take even with the extra runner on base as Cain delivered a three-run homer in the top half of the 10th. Take away that runner on second, and Cain still hits the homer, whereas the Cubs may not have scored in the bottom of the half.