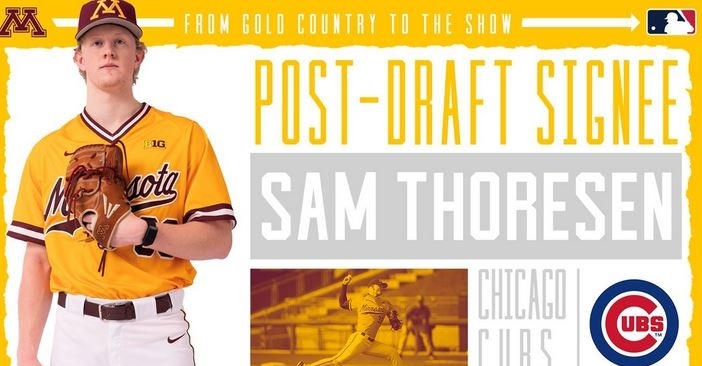 I am all for finding pitching via the undrafted wire and seeing what you have if they are proven arms with tons of experience. For the former Minnesota Golden Gopher RHP Sam Thoresen, that is exactly what the Cubs are getting as he was another solid college level prospect that was not drafted in 2020.

Thoresen fits the exact mold in terms of size for a pitcher as he stands 6-3 and weighs 210 lbs. Is there some room for growth, yes, but right now he is ideal in terms of size and stature and was very durability during his three year run in Minnesota. Coming out of high school, Thoresen was ranked as the sixth-best prospect in Minnesota and one of the top pitching prospects in the state also. He further solidified that ranking by helping his team to a conference championship his senior season in which he threw 47 innings and posted a 1.64 ERA.

Once he arrived on campus, it was clear that Minnesota had big plans for him, and they wanted to get him as much experience as possible. That experience came immediately as a freshman, where Thoresen not only made 14 appearances but saw action in five starts also compiling 35 1/3 innings of work. While his record wasn’t terrible 2-2, his 5.86 ERA was to be expected as his 24 walks/30 strikeouts ratio was always troublesome for a pitcher looking to get his feet wet. The good news, however, was that he held opponents to just a 206 average against proving he had the tools to be great.

After getting those five starts his freshman season, Thoresen was viewed as one of the lead candidates to become the ace of the Golden Gophers staff and started 12 games appearing in 15 total the next season. Despite the large uptick in games, his innings only increased to 46 1/3 while his ERA remained high at 5.24 despite the 4-3 record on the mound.

His walk rate went up to 43 as did his strikeouts to 69 but once again opponents had a hard time squaring up the baseball as they managed to hit just a 192 off him last season. Given the low batting average against and the high ERA it reminds me a lot of how Tyler Chatwood’s career has gone with the Cubs as command issues have done him in much like Thoresen.

Looking to break out as a Junior this season, Thoresen has been primarily in relief in 2020 pitching in five games and starting two. The results have not been pretty as a 7.71 ERA has limited him to just 9 1/3 innings of work despite opponents hitting just .182 off him. Command once again is doing him in as he had 18 walks to go with 19 strikeouts before the season ended, leaving him with 85BB and 118K throughout his college career.

While those college stats are nothing to get excited about, what about his summer stats as he participated in the Northwoods League and Cape Cod league the past two summers. As expected, nothing much has changed as he posted a combined 5.49 ERA across those two summers striking out 50 hitters while walking 39 in 51 innings of work.

From an eye test, Thoresen has not been a great pitcher and certainly hasn’t put up the numbers that you like to see when drafting or signing players. However, the Cubs must see something special in him; otherwise, I don’t see why they would bring in someone with an ERA over five every season he has pitched post high school.

Command issues aside, I can see the main reason why the Cubs want to take a flyer on him as his heater is big time. Thoresen generally sits in the 92-94 range but has touched 96 plus on several occasions, which is where the Cubs feel they can do something with him. That heater along had several teams inquiring about him as the draft process began despite his numbers being what they are thus far.

Once his season was cut short this season and the numbers being as bad as they were, Thoresen considered returning to Minnesota for his senior season, but after much consideration elected to sign with Chicago for cheap. His fastball sits in the mid-’90s and proved to be nearly untouchable against right-handed hitters his entire college career. With the Cubs having a lot of success with their pitching lab, maybe getting Thoresen in the lab can help unlock his potential. Worst comes to worst you are adding a hard-throwing righty for minor league depth.